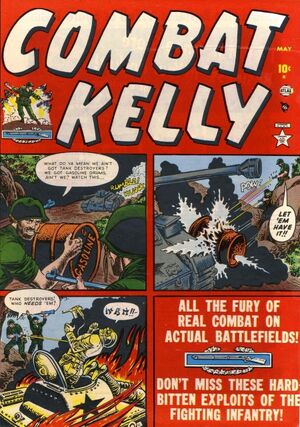 Combat Kelly and Cookie Novak have been on the front lines, fighting over a hilly region. Kelly complains about the amount of hills, and grimly considers that they will have to fight through a region known as Heartbreak Ridge. While at an American military base in Tokyo, military brass begins planning to stop Communist forces from entrenching themselves in the hills. The orders are sent out to the front lines and the G.I.'s are sent out into the thick of it including Combat Kelly and Cookie Novak.

Pounded by enemy fire power, the soldiers get into the thick of battle. During the cross fire Cookie is wounded by enemy bullets but Combat comes to his friend's aid. The battle rages on with massive losses on both sides. When the battle is over, Combat carries his wounded friend back to base.

Appearing in "The Hard Way"Edit

Synopsis for "The Hard Way"Edit

American supply trucks are attacked by Chinese T-34 tanks. Combat Kelly and Cookie Novak who are on patrol watches the slaughter, helpless to stop it. They report the attack to Major Thorn who orders an air strike on the area. But with the T-34's still out there, Thorn orders Combat and Cookie to go out and destroy the tanks before they can attack the next convoy that is bringing in much needed supplies.

While out searching for the tanks, the two soldiers come across a Chinese gasoline drums hidden in giant bails of hay. When they spot the T-34 tanks coming toward the convoy, Kelly and Novak use the gasoline to create Molotov cocktails to attack the tanks, torching the tanks killing their drivers. With the tanks destroyed, the convoy is able to make it's pass through the area unmolested.

Retrieved from "https://heykidscomics.fandom.com/wiki/Combat_Kelly_Vol_1_4?oldid=1419438"
Community content is available under CC-BY-SA unless otherwise noted.