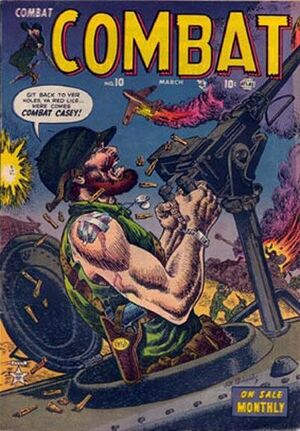 Combat Casey and Penny Pennington are among troops defending an American ammunition dump that is being attacked by Chinese forces. After the battle is over their commanding officer orders them to rest for the night but warns them to keep an ear out for another attack as their ammunition is of vital importance. That night as Combat and Penny sleep, a toy-sized tank rolls into the area and past the sleeping troops and explodes in the ammo dump destroying it. Awoken by the massive explosion the troops are confused that there are no sign of enemy attackers. Investigating the scene they find the strange tracks made by the tank's treads.

The commanding officer then sends Combat and Penny out to search for the source of the attack, but orders them to report back and leave any attacks to the entire unit. As they walk onto enemy lines, Penny stops to pick up a chunk of jade, as he has been collecting various rock samples for his collection. Combat is dismayed to learn that Penny's pockets are loaded with rocks. Suddenly they are ambushed by enemy soldiers. Combat knocks down the closest one and both he and Penny make a run for it, but Penny is so loaded down with rocks he cannot keep up and is captured. The Chinese soldiers then order Combat to surrender or they will execute his friend. Despite Penny's warnings not to surrender, Combat does just that.

They are then taken to the enemy camp where the commanding officer there shows off their army of radio controlled miniature tanks that they are going to send over into the American lines and blow everything up. They decide to show the two Americans their plan as it goes before executing them. As the tanks are activated, Penny asks to take a closer look and the arrogant Chinese officials allow him to do so. They are unaware that a number of the rocks that Penny is carrying have magnetic properties and that they begin messing with the radio signals sending the tanks into a collision course. While the commanding officers panic, Penny then drops a rock down one of the control levers preventing them from shutting off the time bombs inside the tanks.

The Chinese officials then rush to their troops and try to halt the tanks, but their words are useless as the tanks explode wiping them all out. In the aftermath, Penny explains what he did, and Combat decides to make Penny carry a bolder back to base -- jokingly saying that if Penny was able to stop a troop with a handful of rocks, a boulder should help him win the war.

Retrieved from "https://heykidscomics.fandom.com/wiki/Combat_Vol_1_10?oldid=1419270"
Community content is available under CC-BY-SA unless otherwise noted.