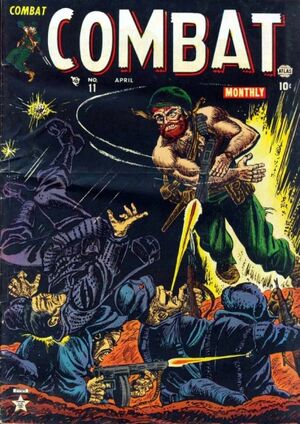 After destroying an enemy bridge, Combat Casey and Penny Pennington report back to Captain Stone. Stone expresses his concern that the enemy may be constructing bridges elsewhere and assigns various troops to go searching for them.

Combat and Penny search along the side of the river and spot a decoy bridge being built to distract American troops while enemies are advancing on the real one not far away. Spotting an enemy fuel truck speeding by, Casey knocks a boulder into it's path causing it to crash. He and Penny then turn put burning rags into the barrels of gasoline and send them down the river, destroying the enemy bridge before it's troops can fully cross. In the aftermath, many of the remaining barrels go down river to the decoy bridge and destroy that as well.

When Combat and Penny return base they find that Stone is even more worried now after reports of strange explosives used to destroy the decoy bridge. Unaware that these were created by Combat and Penny, and suspecting they might be a new enemy weapon, Stone sends the two American soldiers back out on patrol before they can explain.

Appearing in "Decision at Anzio!"Edit

Synopsis for "Decision at Anzio!"Edit

Appearing in "He Died for the Cause!"Edit

Synopsis for "He Died for the Cause!"Edit

Appearing in "The Face of Harry Brown"Edit

Synopsis for "The Face of Harry Brown"Edit

Retrieved from "https://heykidscomics.fandom.com/wiki/Combat_Vol_1_11?oldid=1419271"
Community content is available under CC-BY-SA unless otherwise noted.