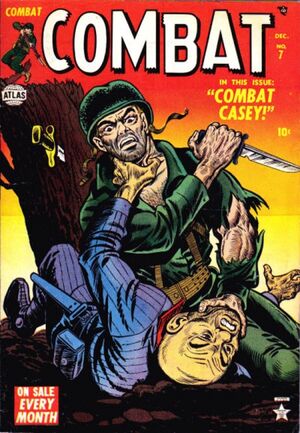 Combat Casey and Penny Pennington are among troops lining a trench when an army of Chinese soldiers advances on their position, lobbing gasoline grenades at the American troops. During the strafe, Penny manages to catch one of the Molotov cocktails and tosses it to Combat, who then hurls it back at the enemy, causing a massive explosion as it ignites their volatile projectiles. Those who are not burned alive flee in sheer panic, but Casey is convinced that they will be back before too long.

Once things have quieted down, a commanding officer approaches Combat and Penny and orders them to locate a missing civilian photographer named "Flash" Finnegan and not to return until they do. Casey bemoans the patrol duty, but Penny is excited because it allows him to examine the plants in the area. Through this observation of the ground, Penny spots discarded flash bulbs and later a bunch of photos. Realizing that Finnegan is leaving a trail for them to follow, Combat and Penny follow after it. They are shocked when t hey find Flash Finnegan and discover that "he" is really an attractive woman and that she is the prisoner of the Chinese.

However, Finnegan is far from helpless, as she convinces the soldiers to gather for a group photo she blinds them with the flash on her camera. As the enemy soldiers are disorientated, Combat and Penny come to her rescue. Flash is immediately smitten by Combat, even though she dislikes his red beard. As they trek across the enemy country side they come across an enemy fuel depot that is hidden in a well. With no weapons to destroy it, Penny suggests that Flash takes a picture of the well. Then while the flash bulb is still hot, he has Combat toss it into the well. The heat is sufficient to ignite the fuel causing a massive explosion.

Running back to base and back to safety, Flash tries to convince Combat to shave off his beard, but he refuses to do so, stating that he promised not to cut it until after the war is over, much to Flash's chagrin.

While on patrol the troop which Combat and Penny are part of find themselves pinned down by enemy artillery cannons which they cannot locate. When Penny spots a nearby mountain, he suggests that they climb it in order to determine the location of the cannons so that they can radio the position back to the other troops. Loaded up with a wireless transmitter, Combat and Penny are sent up the mountain by their superior officer.

Reaching the snowy upper regions of the mountain the pair spot the footprints of Chinese soldiers and follow them hoping to ambush the enemy there. However their prey had doubled back and manages to get the drop on them and holds them at gun point. Inching close to the radio strapped to Combat's back, Penny flips it on and tunes it to the Battle Brady radio show which fools the Chinese soldiers into thinking that they are surrounded and under attack. This gives the two Americans the opportunity to strike back at their would be captors and they are slain by grenades.

Getting to the top of the mountain, Combat and Penny are surprised to see that the artillery cannons are actually on the very mountain they have climbed. Combat radios in the position allowing the troops down below to use their bazookas to blast the artillery to smithereens. On their way back, Combat and Penny come across more Chinese soldiers trying to climb the mountain. This time they manage to dispatch them by rolling a snowball down the hill. As it goes, it grows in size and bowls the enemy combatants off the side of the cliff.

Retrieved from "https://heykidscomics.fandom.com/wiki/Combat_Vol_1_7?oldid=1419267"
Community content is available under CC-BY-SA unless otherwise noted.