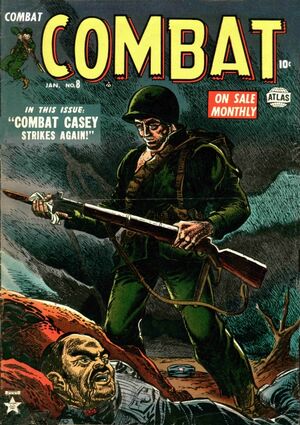 Pinned in a foxhole, Combat Casey and Penny Pennington are holding off advancing enemy troops with a machine gun when their ammunition begins running low. With their only resupply dropped in the middle of the battle field, Combat has Penny cover him while he rushes out to grab it. When Penny runs out of machine gun bullets he lobs a grenade to blast away Chinese troops, but the blast catches Combat as well, seriously injuring him. Pulling Combat to safety, Penny reloads the guns and mows down the rest of the advancing enemy troops.

With the enemy troops dead, Penny begins giving Combat medical aid, and in doing so realizes that Combat is low on blood and needs a transfusion. Checking Combat's blood type on his dog tag Penny learns that they are a match and gives the the transfusion right out on the field, saving Combat's life. Penny then brings him back to base for immediate medical attention. Combat is kept under medical attention for three weeks and refuses to take it easy. When the duty nurse has had enough with Combat, she lets him go back to active duty even though he is not fully healed. Soon after he is discharged, Combat and Penny are put on patrol duty and not long after they are out on patrol they are ambushed by Chinese forces.

They are brought to the Chinese camp where their commanding officer Colonel Pao Young is recovering from injuries sustained in battle. They inform Combat and Penny that the commanding officer needs a blood transfusion and none of the soldiers present have the correct blood type. While Combat refuses to help, Penny agrees. Combat calls Penny a traitor as he is being dragged out to be executed. However, before the enemy soldiers can pull the trigger they are stopped. As it turns out Penny has told the enemy soldiers that Combat has the correct blood type to save Pao Young's life, however this is a lie. After Combat gives the seemingly life saving blood transfusion they are locked in a cell.

Shortly thereafter, Pao Young comes to their cell to personally execute them, however before he can his body rejects the blood that Combat has given him and he drops dead. After Penny explains what he has done, Combat apologizes for calling him a traitor and the two return to base.

Appearing in "Shadows in the Night!"Edit

Synopsis for "Shadows in the Night!"Edit

Appearing in "In Cold Blood!"Edit

Synopsis for "In Cold Blood!"Edit

Retrieved from "https://heykidscomics.fandom.com/wiki/Combat_Vol_1_8?oldid=1419268"
Community content is available under CC-BY-SA unless otherwise noted.