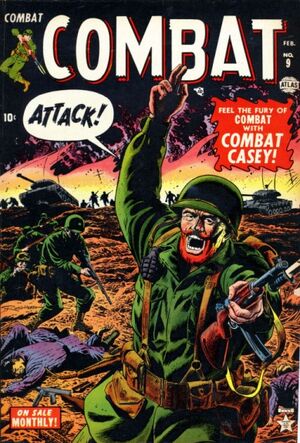 Penny Pennington has been captured by Chinese soldiers while he and Combat Casey were on patrol to find a secret enemy artillery cannon that American forces have been trying to locate with little success. Combat manages to avoid escape by jumping into a nearby river. He then strips off his uniform and sends it down the river filled with air. When the enemy troops shoot at the uniform, they believe that they have killed Combat.

Combat then dives back into the water to try and find a way to rescue Penny before he is executed. However, he is soon caught in a whirl pool and sucked into an underwater cave. From there he sees through a hole that the enemy artillery cannon is hidden inside the very mound where Penny is being held as a prisoner above. Combat rushes up a ladder and succeeds in rescuing his pal. However, as they make their way back to the trap door to the artillery cannon they are caught by a soldier who saw Combat snooping down below and followed after him.

Turned over to the commanding officer, Combat and Penny are forced to fight each other to the death with swords. Combat attacks his friend with a ferocity that is a ruse, it serves to knock them near the trap door to the cavern and flee down inside. They slay the soldiers down below and use the artillery to blast most of their soldiers on the surface. When the enemy commander and his surviving men surround the opening out of the cavern. But are unable to get down as Combat and Penny have it covered with guns. The Chinese soldiers decide to wait out the American soldiers. However, Combat and Penny slip out through the whirl pool cavern and escape to report the artillery's location at base.

Appearing in "The Sergeant and Danny Smith!"Edit

Synopsis for "The Sergeant and Danny Smith!"Edit

Retrieved from "https://heykidscomics.fandom.com/wiki/Combat_Vol_1_9?oldid=1419269"
Community content is available under CC-BY-SA unless otherwise noted.