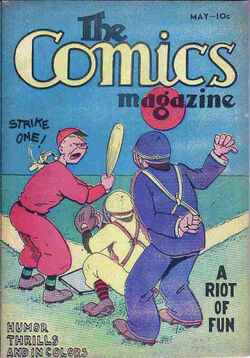 The Comics Magazine Company is the earliest predecessor of the Centaur Group, and is often lumped in with Centaur and its other predecessors. In fact it was a distinct company, formed by William H. Cook and John F. Mahon. Cook and Mahon had been the managing editor and business manager, respectively, of National Allied Newspaper Syndicate and More Fun Magazines (Maj. Malcolm Wheeler-Nicholson's second batch of companies, and early predecessors of DC Comics).

They left after only three months, and started The Comics Magazine which included many features from National drawn by the original artists. Exactly what happened is not clear. A common story has been that they took the finished artwork in lieu of payment, but that does not explain why some artists moved over with them and continued to produce their features for several months. Many of these were also continued at National by different artists and re-named characters. Other features, make a single appearance and then return to National. And some artists continued to produce work for both companies.

The Comics Magazine Company published their last issues cover-dated June 1937. The two oldest titles were acquired by Ultem Publications and resumed with volume 2 three months later. Ultem's titles were in turn acquired by Centaur half a year later.

Essay built on research by Bob Hughes, Steven Rowe, Frank Motler, Henry Andrews and many others.

Retrieved from "https://heykidscomics.fandom.com/wiki/Comics_Magazine_Company?oldid=1640518"
Community content is available under CC-BY-SA unless otherwise noted.