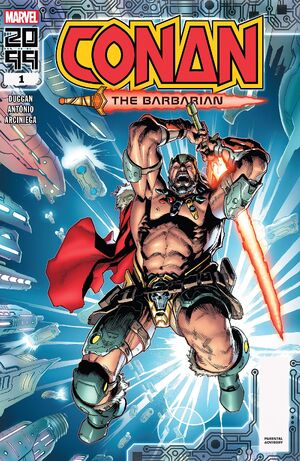 No one makes a slave of Conan.

EONS FROM HOME, THE BARBARIAN BATTLES THE CIVILIZATION OF 2099!

In the far flung future of 2099, will barbarism finally triumph over an endangered civilization? When CONAN THE BARBARIAN entered the Marvel Universe with the SAVAGE AVENGERS, he stayed to conquer and claim his kingship in modern times. Now cursed by a mystic to live beyond his years, when Conan’s new kingdom is threatened, he swings his blade once more! But as the calamity in 2099 bears down on his secluded realm, will the future shock unseat the barbarian king? An unforgettable chapter unlike anything you’ve ever seen in the saga of Conan!

Retrieved from "https://heykidscomics.fandom.com/wiki/Conan_2099_Vol_1_1?oldid=1680349"
Community content is available under CC-BY-SA unless otherwise noted.