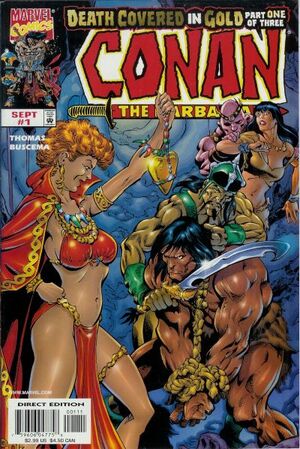 Conan is hired by a prospector and his daughter Marni as a bodyguard to protect them from gold thieves. After the old man is killed by a giant cave worm, the distraught Marni demands that Conan work the mine as that is all she has left. Conan, presumably sympathetic to the pretty wench because he was unable to save her father, agrees.

Retrieved from "https://heykidscomics.fandom.com/wiki/Conan_Death_Covered_in_Gold_Vol_1_1?oldid=1419513"
Community content is available under CC-BY-SA unless otherwise noted.