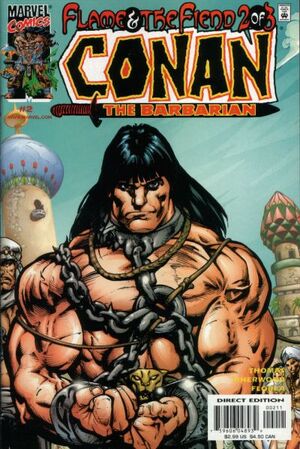 Appearing in "Skeleton Wings Over Turan"Edit

Synopsis for "Skeleton Wings Over Turan"Edit

Conan is imprisoned and brought to Akif by Turanian soldiers and Armati where he tries to break free from Shah Amurath's forces and Armati's skeleton monster. Isparana secretly goes to a cave to checkout on her child from Wrarrl the Devourer of Souls is being hidden. The child has consumed the flesh of his care taker woman and has grown to full Devourer of Souls. Fafnir shows up looking for her and helps her escape the cave. Armati, meanwhile, brings her husband, Kulan Gath, back to life from his collected bones while Conan fights the skeleton demon in Akif. Kulan Gath empowers Conan with his magic and enslaves him in the hanging garden of Akif-one of the Seven Wonders of the Hyborean Age.

Retrieved from "https://heykidscomics.fandom.com/wiki/Conan_Flame_and_the_Fiend_Vol_1_2?oldid=1419517"
Community content is available under CC-BY-SA unless otherwise noted.