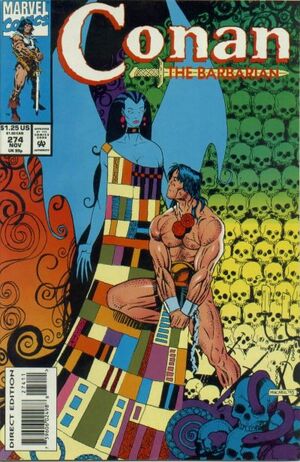 Assassins for the Night-Cult raid Conan's camp ambush him. One assassin manages to knock him out with a lucky shot and brings him back to the wooden temple of the Night-Cult. Conan awakens chained to an alter. The priest of the cult tells him their order disbanded after Conan slew their Night-God ten years gone. Now they offer him up as a sacrifice. A female goddess spawn of the original Night-God flies down and takes Conan. She flies him off to her cave where she plans on mating with him, then feeding him to her young. Conan is at first enraptured by her hypnotic gaze, but he overpowers her control and ultimately destroys her.