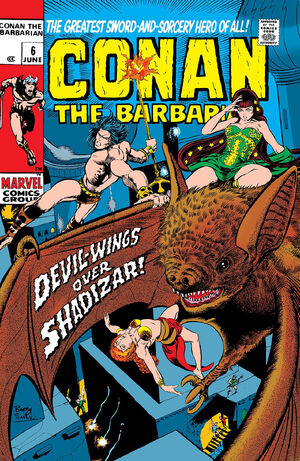 Conan, seeking his fortune in Shadizar, encounters two thieves, Fafnir and Blackrat, arguing over booty. Conan decides to take the treasure himself and quickly takes care of the two incompetent thieves. He enters a bar and strikes up a conversation with a local wench, Jenna. Conan narrowly avoids yet another bar fight and leaves with Jenna, who has more or less attached herself to the barbarian - or perhaps the surprising amount of gold in his purse. She takes Conan to her uncle, Maldiz, a blacksmith, so he may melt down Conan's suspicious-looking gold coins into a new shape. Word has spread about the earlier robbery, and both Jenna and Maldiz put two and two together. With his now untraceable gold in his purse, Conan takes a moment to enjoy Jenna's company under a palm tree, but that moment is quickly ended when he is knocked unconscious from behind by a trio of red-robed men. Curiously, they take only the girl, and leave the gold behind. Conan seeks help from Maldiz, who recognizes Conan's description of the men, and declares Jenna lost. The men are followers of the Night-God, who sacrifice a young girl every month to their evil lord. Conan heads towards their temple, steals a robe, and enters the evil cult's lair. He arrives just as the Night-God's priestess, Hajii, completes her prayer, and puts out the brazier, plunging the open-roofed temple into darkness. Conan takes the opportunity to sneak to Jenna, but discovers the secret of the Night-God, it is a giant bat-like creature who swoops in to devour its sacrifice. It grabs Jenna in its talons, but Conan leaps upon the monster's back. Hajii manages to grab Conan and all are flown into the skies. Conan thrusts his torch repeatedly into the beast's eyes and body, while Hajii desperately tries to stop the barbarian from slaying her god. Conan is victorious, and the monster plunges to the ground, disorienting Conan long enough for Hajii to pull a dagger and strike in vengeance. Luckily, the priestess forgot about Jenna, who knocks Hajii out with the brazier before Conan can be killed. However, when Conan wakes, he discovers Jenna and the gold long gone.