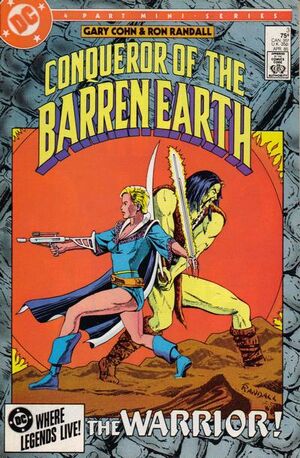 My Lord -- Your strength -- is incredible! You killed a qlov with your bare hands!

Barasha, Skinner and Renna finally meet up with Jinal and the army of Zhengla, but they are shocked to learn that Jinal is not his captive, but has sided with the warlord. Still avowed against the warlord, Barasha challenges Zhengla to a duel Despite his ferocity, Barasha loses out to Zhengla. Barasha prefers death, but Jinal convinces Zhengla to spare Barasha, and Barasha to ally the Harahashan with Zhengla's forces.

The Old Ones witness Jinal's success in uniting two large forces, realizing that she could forge the first genuine empire Earth has seen in thousands of years and now deciding they must now intervene. At the same time, a Qlov ship - the narrow victor in Jinal's 1st battle in space - receives a call. They are surprised to learn that the signal comes, not from space, but from the desert.

Back in Zhengla's camp, Skinner and Renna have their first chance to speak with Jinal since their reunion. They are surprised when Jinal tells them that her show of unity with Zhengla is no show at all - she really shares the warlord's vision of conquering the Barren Earth.

Despite its being protected by the Old Ones, the "open city" of S'Keen is Zhengla's next target for conquest. His army is met by a ship of the Old Ones, which promises to give the city to Zhengla. Instead, the army is led to a trap - into a city of burrows of Qlov. While a Qlov ship joins the battle, the Qlov on the ground appear to be primitive versions of those that Jinal's side has fought against for centuries. Nevertheless, Jinal is able to defeat the Qlov's ship's crew and commandeer the ship. Despite their armored hide and their great strength, the Qlov are defeated in personal battle by Zhengla in a display of strength that surprises even Jinal.

Having defeated the Qlov, Zhengla captures S'Keen, and holds the city against an attack by D'Roz ships. Now only the city of the D'Roz itself stands between Zhengla and the conquest of The Barren Earth.

Retrieved from "https://heykidscomics.fandom.com/wiki/Conqueror_of_the_Barren_Earth_Vol_1_3?oldid=1419702"
Community content is available under CC-BY-SA unless otherwise noted.