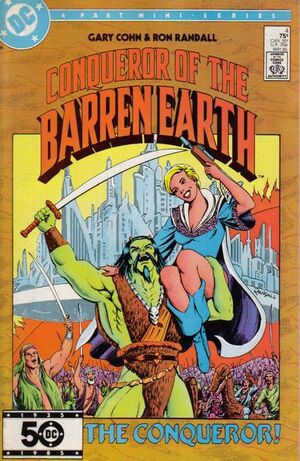 You have sought my downfall -- but I have conquered you!

Having fought together, Jinal, Barasha and Yisrah are "invited" to share a ritual with Zhengla in which they will consume mushrooms in the Garden of the Mulge, and reveal their true selves. The Warlord becomes a sword-wielding giant, while Barasha becomes an immense serpent. Jinal becomes a bright beacon, but her transformation is incomplete before Yisrah's true identity as one of The Old Ones is revealed. Zhengla, realizing the truth, strikes at Yisrah with his sword, only to learn that the secret agent of the the D'Roz used a short-range teleporter to escape.

Finally turning on the floating city itself, Zhengla eventually captures it. Gigantic, powerful but short-ranged robots built by the D'Roz fail to keep Zhengla's forces from breaching the city. With Skinner and Renna, Jinal follows Zhengla into the city and helps destroy its inner defenses - which briefly include the animated and super-powered body of the [previously presumed-dead Chairman Mangle.

Finally reaching the inner sanctum of The Old Ones, Zhengla proclaims his conquest. The Old Ones relinquish the city - and apparently the last obstacle between the warlord and world rule - only for Jinal to finally betray and kill Zhengla. Despite her previous assurances that she had no plan, Jinal in fact had been manipulating events for months - steering Zhengla into a position in which he could achieve absolute rule of the world, and in which she could finally steal it from him. Before he dies, the warlord tells Jinal that he now understands what his vision was - to conquer the world, but not rule it - and that Jinal was obviously a part of that destiny. Before dying, the warlord asks Jinal to take his dream of creating a new civilization on The Barren Earth.

Now the uncontested ruler of Earth, Jinal uses the mushrooms of the Mulge to attain vision of her future. She sees herself creating a new empire on The Barren Earth, of leading its inhabitants to the hidden star cruisers and, teaching men to fly the ships - leading them into space where she will lead them against the Qlov. Her vision is blocked at that point as Yisrah appears and reveals the truth about the Qlov - rather than genuine aliens, the insect beings were actually engineered by The Old Ones, the greatest success in a line of experimenation that also created the Harahashan and the Mulge - their burrows on Earth revealed their terrestrial origins. Qlov proved so supremely adaptable that they evolved from primitive hives to interstellar travel in only a few thousand years. Humans living far from Earth had earlier known of the Qlov and were terrified of the new beings, vowing to resist should they appear in their quarter of space. It was Jinal's destiny to learn the truth about them and set things right between them and man. "When you awake", Yisrah says, the city of The Old Ones "will hold no secrets from you".

Realizing her destiny, Jinal rises and seeks Renna and Skinner, only to find that a gigantic human starship has appeared in the skies over The Barren Earth. Her rescue has finally appeared.

How Jinal will now realize her destiny is a story that remains untold.

Retrieved from "https://heykidscomics.fandom.com/wiki/Conqueror_of_the_Barren_Earth_Vol_1_4?oldid=1419703"
Community content is available under CC-BY-SA unless otherwise noted.