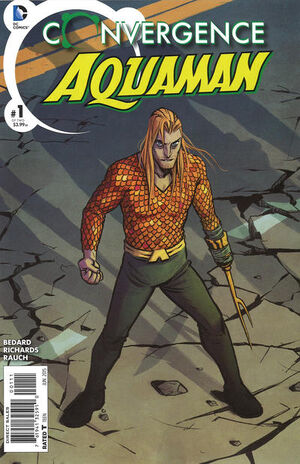 Crime has dropped in Metropolis, since the dome came down, but that hasn't stopped crooks from targeting people for fun. Fortunately, Aquaman has been trapped under the dome with them, and protects innocents when he can. Unfortunately, those innocents are not exactly grateful for his help.

His fish-out-of-water status has earned him unwanted media attention, and people are now aware of how mentally unstable he has become as a result of separation from his home - and his hand. Early after arriving, he fashioned a spike to replace that hand, and used it to defeat Chemo, but in the process, he polluted the harbour, further isolating him from what little water there was left to him. He has since taken up residence in the city aquarium, and had a hook device attached to his wrist, in place of the spike.

At S.T.A.R. Labs, Dr. Dane Dorrance attempts to get Aquaman to open up about his mental state, noting that many other metahumans lost their abilities under the dome, but he was able to retain his atlantean biology. He has, however, been cut off from a telepathic connection with the fish of the sea, and Dorrance suspects it's hurting him. Aquaman admits that it has taken a toll, but refuses to talk about it.

Bad as he feels for shutting out Dr. Dorrance, Aquaman knows that talk won't get him back to his Mera. Still, he does trust Dane, ever since he came to him during the standoff over his declaration of ownership on the Aquarium. Aquaman had recognized Dorrance as a member of the Sea Devils, and listened to him because he seemed the only person intent to take him seriously. He talked Aquaman out of staying in the Aquarium, and gave him a home in S.T.A.R. Labs, even convincing him to go out on patrol and reestablish his good guy image.

As he showers, for hydration, the water suddenly shuts off, and Aquaman rushes out as he hears a voice coming from beyond the dome. It warns that the dome will soon fall, and champions from all of the cities in the planet's surface must rise and fight one another for the right of their city's continued existence. As the dome falls, Aquaman's powers begin to return.

Meanwhile, other metahumans are beginning to regain their powers - including Parallax. The DEO worriedly begins tracking him, but come under attack themselves by Deathblow. He then hacks into their system, looking for info on the metahuman population of this city. When he discovers Aquaman, he knows he's found his target.

Retrieved from "https://heykidscomics.fandom.com/wiki/Convergence:_Aquaman_Vol_1_1?oldid=1419638"
Community content is available under CC-BY-SA unless otherwise noted.