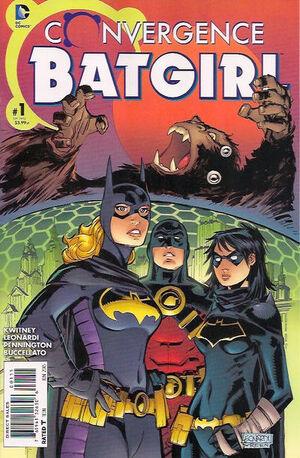 I mean, I may not have been the best Batgirl ever, but over the past year in Gotham beneath the dome, I learned how to be a pretty great Stephanie Brown.

Appearing in "The Love Song of Stephanie Brown"Edit

Synopsis for "The Love Song of Stephanie Brown"Edit

As champions from Gotham City, Batgirl, Blackbat, and Red Robin are waiting in the desert of El Inferno for an opponent to come. Batgirl wakes the others to relieve her from sentry duty, so she can relieve herself, but they initially suspect her of trying to run away from this responsibility. She denies it, but inwardly, she believes that she would fail if an opponent did come for her. After she has gone, Tim wonders aloud why it was Stephanie who was chosen as a champion and not him or Cassandra. Cass responds that perhaps it is because Stephanie is unpredictable.

Awkwardly, Steph attempts to figure out how to easily get out of her uniform to do her business, but she is interrupted by Catman, who attacks her suddenly. He explains that he was fighting General Grodd in South Africa, when he was transported to this place, without warning. He notes that despite having Red Robin as backup, the young man appears to be smiling about something. Confused, Stephanie tries to question him about it, but he seems to be under the influence of something. Worriedly, she supposes that if Tim is affected, Cassandra might be in trouble too.

She discovers Cassandra doing battle with Grodd himself, and the scene terrifies Stephanie. She knows that she was selected to be the champion, not Cassandra - but seeing Grodd, she can't help but fear that she was chosen by mistake. A year ago, when the Dome first appeared, she had seen how the people lost their composure. She saw how super-heroes lost their powers. Even though she had no powers to lose, she lost her will to remain as Batgirl. She became a nurse where she was needed, and learned how to be a better Stephanie Brown than a Batgirl. When she helped deliver babies, her mind would drift back to the fact that she had a child somewhere, beyond the dome. As she and the doctor she assisted walked home one night, they were held up by Killer Moth, but in this new situation, she couldn't muster any fear. She simply told him off, and walked away - a new skill, since quitting Batgirl. Under the dome, wearing a cape seemed to escalate conflict, more than it stopped it.

She and Cassandra were living together, and as food was scarce, they'd begun breeding guinea pigs for meat - but having fed their guinea pig for so long, Steph didn't have the heart to kill and eat him. Cassandra had no such qualms, and Steph challenged that she would fight her for his life if she had to. Cass made a move as if to punch, and Steph reacted defensively. Coldly, Cass pointed out that Steph's body language spoke of fear. Their inevitable argument was interrupted by a news broadcast reporting on the commands from beyond the dome. The news listed all of those from Gotham who were selected as champions, and Batgirl was among them - not Blackbat or Red Robin. As it happened, Cass had kept Steph's uniform for her all this time. After getting her back into it, Cass trained Stephanie, who increasingly felt like she had lost whatever it took to be Batgirl. In her heyday, at least she had been a match for Tim - in combat and in love.

Unfortunately, Steph's training was cut short by the stampeding Gothamites, trying to get out of the city, and beyond the dome. They had felt like prisoners in their own city for so long, and they wanted to experience some kind of freedom - only there was no telling what lay out there. It was time for some on-the-job training for Steph instead, protecting people from themselves. After leaping down into the fray, Tim and Cass quickly lost track of Steph, but were surprised when they heard her voice over a megaphone. She warned the crowd that she had a tear-gas grenade that would blind anyone within a one-block radius for upwards of six hours, and the threat calmed the crowds somewhat.

Unfortunately, moments later, apparently sentient spheres began to swarm around Steph and carry her away. Desperately, Tim and Cass grabbed onto her, trying to pull her back, but they were taken with her - to El Inferno.

Retrieved from "https://heykidscomics.fandom.com/wiki/Convergence:_Batgirl_Vol_1_1?oldid=1431081"
Community content is available under CC-BY-SA unless otherwise noted.