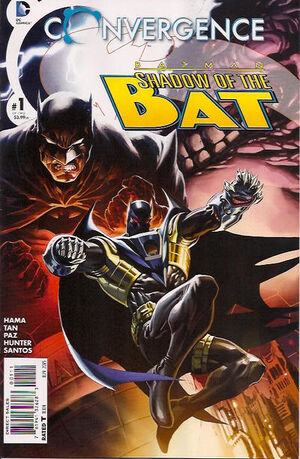 I'm getting a little more than tired of you telling me what to do. I hope you're not going to be on my case while we're fighting for the lives of everybody in Metropolis!

Appearing in "The Dark Side of the Street"Edit

Synopsis for "The Dark Side of the Street"Edit

Trapped in Metropolis by a huge dome, cutting off the city from the rest of the world, Bruce Wayne is attempting to worm his way into the criminal underworld, offering his fortune in support of Tobias Whale. Though Wayne's greed is convincing, Whale feels the need to see the truth beaten out of his potential business partner, and sets a new recruit to do the dirty work. That new recruit, though, happens to be Jean-Paul Valley, who warns Bruce that he should be taking it easy with his broken back, instead of whatever he's up to now. Bruce explains that he was drawn to Metropolis by the transformation of Green Lantern into Parallax. Unfortunately, he lingered too long, and ended up trapped beneath the dome. When the Whale started getting too close to taking over food distribution, he couldn't let it slide - obviously, Jean-Paul has the same idea, of taking him down with an inside job. Jean-Paul is unsure he wants to ally with Bruce, given their disagreement on how best to handle crime, but goes along with it. For the sake of convincing the Whale, though, he has to beat Bruce quite brutally.

Afterwards, Bruce explains that despite the questionable origin of the food that's being doled out to Metropolis' citizens, its scarcity gives it value, and Whale wants to take advantage. Jean-Paul introduces Bruce to the Whale again at his HQ, vouching for his sincerity. Whale is unconvinced, though, and suggests that Bruce can prove himself if he uses his political pull to learn the route by which the food is transported to distribution services, given that it changes with every transport.

At City Hall, Bruce and Jean-Paul pay a visit to councilman Erasmus Hall, leaning on him to give up the route. Jean-Paul's methods are cruel and Bruce does nothing to stop him. Before long, though, they have delivered the route to Whale - unfortunately, Whale has a further task for Bruce: kill Erasmus Hall, and tie up that loose end. He grins, though, admitting that it was a joke. He already had his people kill Hall, and make it look like a suicide. Bruce has to keep his cool as news coverage shows Hall's wife and children grieving him.

Two days later, both Jean-Paul and Bruce are back in their Batsuits, but Jean-Paul revels in it a little more than Bruce feels is healthy. They are stuck waiting for Whale's hijack plan to go into action in order to thwart it, as they were both too low in the chain to do anything about it in their undercover personas. As the truck passes by, Jean-Paul leaps down onto it, hoping to himself that Bruce is backing his plan, after he decided to take the stairs.

Soon, Whale pulls in front of the convoy in an SUV, taking out the armoured cars escorting the transport truck with a rocket launcher. As the driver of the truck passes by, Nikka, one of the Whale's thugs, shoots him dead, and the truck coasts onto the hook of a tow-truck, dragging the transport away. In the hopes of preventing the second truck from being grabbed, Jean-Paul smashes through the windshield and hijacks it himself. Confused by what's going on Nikka is almost too late to see her own vehicle is speeding toward a second Batman. She attempts to run him over, but within moments he is leaping through her side window, and causing her to lose control. Whale, however, knocks him away from her with a harpoon. Bruce then turns his attention to Whale, allowing Jean-Paul to take out the other of Whale's thugs - in the most violent and fatal way possible. Bruce is displeased, but his focus is still on Whale, even as Nikka trains a bullet on him. As Jean-Paul goes after her, Bruce warns him not to kill her.

As tensions are high, and Bruce grabs Jean-Paul by the cape to hold him back, a voice rings out from beyond the dome, with news that the dome will soon fall, opening the way for champions from other cities to fight for their right to survive. As the dome disappears, the elevated rail system that was being held up solely by it collapses on top of Nikka's vehicle. In the confusion, Jean-Paul knocks out the Whale, angering Bruce, despite the fact that they will soon have to be ruthless in killing other champions if they want to survive. Unexpectedly, Bruce feels some kind of shift in reality, just as the beings from another world who were spying on him sense it too.

Retrieved from "https://heykidscomics.fandom.com/wiki/Convergence:_Batman:_Shadow_of_the_Bat_Vol_1_1?oldid=1491607"
Community content is available under CC-BY-SA unless otherwise noted.