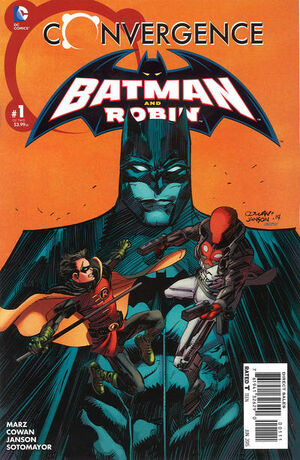 Of all the things I learned from you, how to be a father was not one of them.

In Robinson Park, Poison Ivy has come up against The Penguin and a group of other criminals, who wish to take over her gardens - which have been feeding the domed city - and turn a profit from it. When the Penguin tries to have Man-Bat physically remove her from the park, though, Batman and Robin intervene. While Robin forcefully steers Man-Bat into a stone monument, Batman catches Ivy in mid-air. Once she is safe, he and Robin turn to the other villains, with Robin taking on Black Mask and Batman facing Mister Freeze - the latter of whom has already begun to lose his motivation to commit any crimes. Batman warns Penguin that while Gotham City may be isolated from the rest of the world, it is not defenceless.

Unfortunately, Killer Croc chooses that moment to chomp into Batman's shoulder. Instead of Robin, coming to his aid, though, it is The Red Hood. Jason explains that he has been trying to help, having joined with Scarlet. He assures Bruce that the pair of them will be around from now on. Afterwards, Ivy thanks Batman for his help, and he explains that it's no different than what he's always done. She wonders, though, how long he will have to keep up this fight, and he assures her that it will be as long as it takes. He has help, after all.

Back at the Batcave, Damian is displeased with his father's welcoming attitude toward Jason Todd returning as a vigilante in Gotham - especially considering his history. Bruce assures him that Jason is no replacement for Robin, and certainly no replacement for his son. Angrily, Damian reminds that the two of them have been protecting Gotham alone for more than a year, and as soon as Jason showed up, Bruce acted like he was part of the family. Grumpily, he removes his costume and suggests Bruce find a new partner - or an old one.

Later, Bruce seeks guidance by talking to the portrait of his father in the study. He explains that of all the things he learned from Thomas Wayne, how to be a father was not one of them. He had not been there for most of Damian's life, and in many ways, he is more his mother's son. He still hasn't figured out how to reach him. As the Bat-Signal shines in the sky, Bruce asks Alfred to rouse Damian for patrol, but Alfred reports that Damian is gone - with one of the Batmobiles.

Bruce correctly assumes Damian has gone to find and fight Jason Todd, and locates them on a rooftop before things get too serious. Annoyed, he turns to Jason and warns him that fighting Damian like this is unacceptable. He turns to Damian, but all the boy is concerned about is which of his proteges he came to save.

Suddenly, a voice from beyond the dome rings out, warning that the barrier around the city would soon recede, and champions from within the city must fight for its survival against the champions of other city. Hearing this, Batman warns the others that he won't be forced into combat like this. They will find another way. Unfortunately, they might not have a choice, as The Extremists have already arrived to challenge them.

Retrieved from "https://heykidscomics.fandom.com/wiki/Convergence:_Batman_and_Robin_Vol_1_1?oldid=1431082"
Community content is available under CC-BY-SA unless otherwise noted.