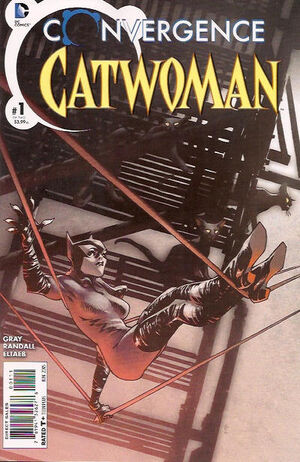 And the really crazy thing, the thing that hasn't changed despite some all-powerful unknown dropping a bell ar on the entire city... Iit's still about the haves and the have-nots.

Catwoman has arrived in Metropolis to find that the diamond necklace she'd intended on stealing has been targeted by another group of thieves - rather, the heiress wearing it has been targeted for kidnap. Annoyed, she thwarts the kidnapping, but fails to get the necklace before security arrives. Moments after making her escape, though, a dome appears around the city, effectively cutting it off from the rest of the world.

A year later, Catwoman has taken to protecting the Suicide Slum territory, and when a gang of murderous mercenaries invades, she is there to stop them.

Bruno Mannheim, meanwhile, has taken control of much of the city by gaining control of the distribution of medical supplies and food. He wanted more though, and raised prices, kidnapping scientists and chemists to maintain his monopoly on medicine. One of those he kidnapped, though, was a friend of Catwoman's. And so she's come to Intergang to get her friend back.

Using an EMP grenade, Catwoman breaks in, and quickly locates her friend Sally. Attempting a desperate escape, they make it onto a nearby roof, only to hear a voice coming from beyond the dome.

The voice warns that the dome will soon fall, and that challengers from all of the different domed cities will have to fight each other for the survival of their home and people.

Not long after the announcement a Batman appears to challenge her - but not her Batman.

Retrieved from "https://heykidscomics.fandom.com/wiki/Convergence:_Catwoman_Vol_1_1?oldid=1431033"
Community content is available under CC-BY-SA unless otherwise noted.