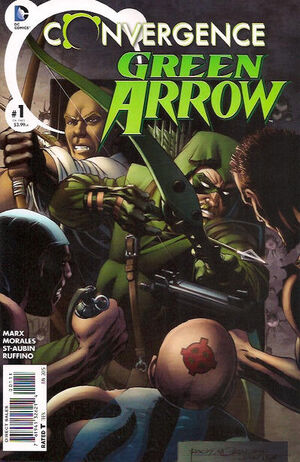 Listen, this isn't going to work. I'm barely any kind of hero, let alone a father.

Appearing in "Father and Son"Edit

Synopsis for "Father and Son"Edit

Green Arrow is trapped in Metropolis, since a dome formed around the city and cut it off from the rest of the world. Unfortunately, the realization that they are trapped has caused the citizens to turn desperate. As he rides his motorcycle around the city, he spots a disgruntled man fire off a pistol at the dome in despair. When Ollie tries to calm him, he turns the gun on himself, requiring an arrow to knock the weapon out of his hand. Struggling, Oliver attempts to help the drunken man home, but he explains that his home is outside the dome. He'd come to the city for an astronomy conference, while his family was in Maine. Now he's separated from them and the stars by the dome. Reluctantly, Oliver leaves him to sleep it off on an abandoned sofa, unable to think of anything encouraging to say.

When the dome appeared, the brightest scientific minds in Metropolis had tried to find a way out, but within a few months, they gave up. They'd found all they could, and it wasn't enough. As good as it was to be put on level playing field with the super-powered beings who lost their abilities under the dome, Oliver can't find a reason for their captivity, and it bothers him.

The next morning, a family is terrorized by a gang called the Brothers of Purity, a group of white supremacists who have driven families of colour out of their homes. Fortunately, they are run off by a rain of arrows, as Connor Hawke comes to the family's aid. Angrily, they swear to get revenge on him as he turns to look to the family's safety. They explain that because of the Brothers of Purity, they've lost everything, and he decides to welcome them into the sanctuary he calls the Ashram. As they make their way there, the family's young son discovers a green arrow on a sofa and wonders if it belongs to Connor. Seeing it, Connor recognizes it as belonging to the Green Arrow, and is filled with gladness, knowing his idol is somewhere in the city. He plans that night, to send off some green flares, in order to signal to him that they should meet.

While contemplating how best to get Green Arrow's attention, Connor is interrupted by one of his charges, who warns that the Brothers of Purity have raised a mob up outside the Ashram. Sighing, he decides he must fire off the flares now to get help. Carefully, he looses them in exactly the right formation and timing to produce a green arrow in the sky, pointing to his location. Though he isn't sure who or what could have made the signal, Oliver sees it, and knows it must be for him.

While he waits, Connor tries to keep the mob back from the doors of the Ashram by loosing blunted arrows at them, but the barricade at the doors that's doing most of that job for him is beginning to fail. Before them men can rush inside, though, Oliver catches up to them and looses a flash-bang arrow into their midst, blinding them. After sending the thugs running, Connor runs out to greet his hero, explaining that he's been following the Arrow's work for some time, hoping to be as great an archer. Oliver is interested to learn that Connor's home is called the Ashram, having been to a place called that in California for a time. Connor admits that he came from that ashram, but was sent to this place to investigate a land inheritance from a donor, just before the dome came down. Oliver offers that he came to Metropolis looking for someone, but he won't say who. Giddily, Connor wonders if it was him, revealing openly that he is the son of Moonday Hawke, and that Oliver is his father.

Oliver is uncomfortable with this knowledge, but Connor suggests that if they are both trapped under the dome, some kind of fate must be at play. They were brought together. Despite Connor's optimism, Oliver attempts to excuse himself, assuring him that he's doing Connor a favour by leaving. He had deserted his child when Moonday had shown Connor to him. He'd thrown money at her and walked away. Connor accepts that it was a stupid mistake - but now's not the time to repeat it.

Their argument is interrupted suddenly by a voice, ringing out from beyond the dome. It warns that the dome will soon fall, and champions will be selected to fight those from other domed cities. The victors will decide which city survives, and which will be erased. As the dome recedes, Oliver looks out at the landscape, and realizes that this is not the planet Earth. Through his binoculars, he sees the citizens of Metropolis trying to leave the dome, and worries for their safety. Together, he and Connor attempt to head them off, but they are both mysteriously transported to another city.

Seeing empty streets, they confusedly wander until they hear voices. Turning a corner, they are faced with a Dinah Lance who is not their Dinah Lance - and a daughter Oliver's never seen before.

Retrieved from "https://heykidscomics.fandom.com/wiki/Convergence:_Green_Arrow_Vol_1_1?oldid=1431037"
Community content is available under CC-BY-SA unless otherwise noted.