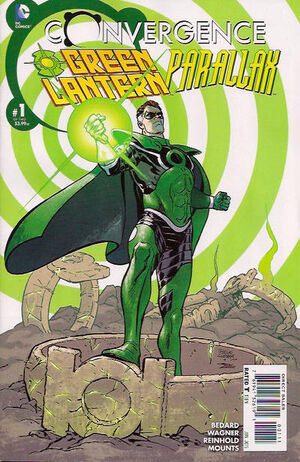 People of Electropolis! I had no quarrel with you before coming here! But your princess sealed your fate when she attacked unprovoked! So think of her as you perish. I promise I'll make it quick!

Appearing in "Crime and Punishment"Edit

Synopsis for "Crime and Punishment"Edit

Kyle Rayner was a Green Lantern for a very short time before the dome came down around Metropolis - and shortly thereafter, the Green Lantern Ring he had been given stopped working. Ever since, he has taken time out of his life to pay frequent visits to the police station's celebrity inmate - Hal Jordan. Though Hal also lost his power when the dome came down, he has been imprisoned all the same for the murders of the Guardians of the Universe - and he feels that imprisonment is justified. After his home town of Coast City was destroyed by Mongul, he tried to use his power as a Green Lantern to somehow bring back the city. In the search for more power, he turned against the Green Lantern Corps, killed every one of them, and stole their power rings. Though the dome robbed him of that power, it helped him come back to his senses, with the unfortunate memory of what he'd done left intact.

Kyle is insistent upon reminding Hal that it wasn't him that committed those crimes. It was the entity Parallax, who had been internalized through the power of all of the rings Hal had stolen. He feels Hal doesn't belong in jail, but it was Hal himself who asked to be put away. None of Hal's old super-hero friends believe he should be punished, and Kyle feels Hal could put his feelings to better use doing some good for the people of Metropolis. Hal, though, reminds that his failure was in that he didn't have the willpower to stop himself in his moment of weakness. Willpower is the hallmark of the Green Lantern. Conceding, Kyle takes his leave, but not before Hal shouts after him that his one consolation in all that happened is that his successor was a better man.

As Kyle leaves the jail, he realizes that his visits with Hal have been taking his mind off of the murder of his unfortunate girlfriend Alex, which had haunted him since the dome appeared. He is interrupted from his reverie, though, by a voice from beyond the dome. It warns that the dome will soon come down, and champions from all of the cities on this other planet's surface will be chosen to fight for their city's survival. Kyle sees that he has been chosen as one of those champions, and steels himself. As soon as the dome comes down, Kyle is restored to his role as Green Lantern - with exactly the same ring charge he had before the dome came down. It doesn't take him long to realize, though, that if he got his power back, so did Hal.

Parallax breaks out of the jail cell, and flies high over Metropolis, regretting feeling sorry for himself for this year. He resolves that he might try to annihilate whomever it was that imprisoned the people of Metropolis, but he is stopped at the border of the city by Kyle, who tries to get through to the man beneath the Parallax persona. He can see that he's getting through to Hal, but soon he is attacked by Princess Fern (Earth-Six) from the city of Electropolis. Angrily, Parallax retaliates, gripping her in a fist of green energy. He releases her, but only to go to Electropolis alone, promising to destroy it.

Retrieved from "https://heykidscomics.fandom.com/wiki/Convergence:_Green_Lantern/Parallax_Vol_1_1?oldid=1431039"
Community content is available under CC-BY-SA unless otherwise noted.