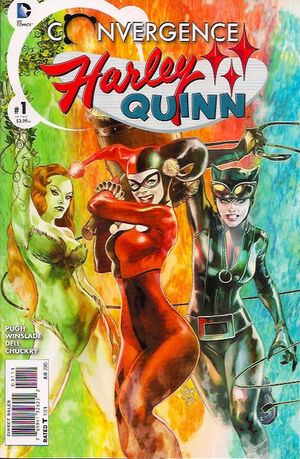 Why can't a girl be nice to a guy without the mook trying to moider her?

Appearing in "Down the Rabbit Hole"Edit

Synopsis for "Down the Rabbit Hole"Edit

Harley Quinn is at the Gotham Museum of Art to steal a bejewelled hyena skull, as the artist in question had failed to take into account that someone might be interested in that, as opposed to the bejewelled cat, or penguin he'd pulled from the show. Unfortunately, her mooks are less into it than she is, and things start to go awry quickly. The police soon arrive, and shoot one of her least helpful hirelings dead. As she tries to hurry the remainder of them along in getting the skull for her, Bud and Lou begin whining, signalling something's wrong. Looking up into the sky, Harley and the police see a dome forming over their city.

Some time later, Harley visits her psychiatrist, Dr. Elstree, to discuss how she's been doing lately. He admits that he gave up his office to a Victims of the Dome support group, and they are now forced to meet in the atrium. She lies that she doesn't hallucinate the Joker's presence anymore, admitting that ever since the dome came down, she has been feeling somewhat optimistic - unlike most people. For her, the sudden rescue of Gotham City from some untold destruction proves that there is a higher power beyond the dome. Since the dome event, Harley has actually been reaching out to the community - specifically, Officer Louie D'Anna, whom she had nearly killed during her botched robbery. Dr. Elstree had arranged for her to meet him as a means of trying to make her develop some empathy for her victims, so she could confront the damage that Harley Quinn did. After that, though, she met him again in one of the support groups.

Harley returns to the home she shares with Louie, still hallucinating the goldfish from Dr. Elstree's office, swimming between her fingers as she begins cutting vegetables for dinner. Suddenly, though, the Joker's face appears behind her, and she is so shaken that she crumples on the floor, screaming for Louie. He rushes to her side and comforts her, explaining that there's nobody there but them. Happily, she kisses him, and pins him to the couch.

Elsewhere in Gotham, Poison Ivy is having difficulty fighting off a gang of thieves from one of her vegetable gardens. Ever since the dome, many of Gotham's freaks lost their abilities, and Ivy is no exception. Fortunately, Catwoman comes to her aid. After helping her take down the thugs, though, they are all startled by a rumbling voice from beyond the dome. The voice warns that the dome will soon fall, and champions from this world and those in the other domes will have to fight to determine which city will survive. Strangely, though, it appears he's selected Harley Quinn as this city's champion - to fight a cartoon rabbit from one of the other domes. Neither Catwoman nor Ivy feel this is bodes well for their continued existence.

Hurriedly, the pair storm into her apartment, and despite Louie's adamant protestations, they both agree that there is only one way to make this work: they need to get the old Harley back; the crazy Harley. Ivy injects her with a toxin to counter-act the mood stabilizers in her body, but Louie warns that Harley had been off her meds for months already. Nervously, they wait to see which Harley will wake up for them. When she does come to, Harley Quinn is crazier than ever.

Retrieved from "https://heykidscomics.fandom.com/wiki/Convergence:_Harley_Quinn_Vol_1_1?oldid=1431040"
Community content is available under CC-BY-SA unless otherwise noted.