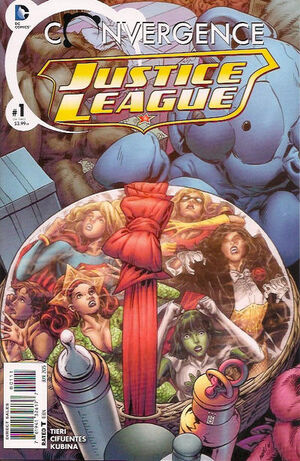 I don't care. It's... my Mera. The Gods have given us another chance. I certainly don't intend to waste it.

Jesse Chambers has gone into labour during her own baby shower, and now it's up to Supergirl to get her to the hospital on time. Fortunately, she is successful, and Jesse is wheeled off to deliver her baby. Soon, Zatanna transports Vixen and Jade to the hospital waiting room along with all the presents, which Vixen was loathe to leave in the restaurant unattended, given her inherent mistrust of anything in Gotham City - which had been Zatanna's decision in the first place. Soon, they are accosted by a hospital official, who warns that their party member, a yellow gorilla cannot be admitted to the hospital, much as he'd like to be. However, in that moment, Jade looks out the window and discovers that a dome has formed around the city, and Congorilla's misadventures are soon to be the least of their worries. As if in answer, Jade's skin fades from green to a natural shade, signalling that her abilities have gone.

A year later, the ladies have all become somewhat accustomed to their new lives as socialites - without powers. Zatanna is getting by as a stage magician of the normal variety, and it makes her one of the few celebrities left in Gotham. Kara works for the Gotham Gazette, and Jesse is a full time mother, now. For their night out, she had the foresight to have Congorilla look after baby Tim, allowing the ladies a girls' night out. Unfortunately, the one who seems to be least enjoying herself is Mera, who was separated from her sea - and her husband - by the dome. Zatanna tries to get her to cheer up, albeit without much sympathy. She is interrupted, though, when the dome seems to come alive with images, and a voice rings out warning that the dome will soon fall; that champions from each of the domed cities must fight each other for the survival of their world's last remains.

Meanwhile, under the harbor of a different Gotham, Orin is called away from torturing one of his subjects by news of the dome's falling. When he asks to see the other Gotham displayed on his screens, he is surprised to discover that that world has its own Mera. He believes this is his chance to have her back, and he does not intend to waste it.

With the dome down, the ladies' powers have returned. Intending to turn their attention to the citizens who might need guidance in this confusing time. Unfortunately, Mera appears to have gone missing. In fact, she is in an alley trying to make a call to Aquaman - but he won't pick up. Unexpectedly, she is grabbed from behind, and kidnapped.

Having looked everywhere for her, the ladies start to give up hope, until Jade spots Mera being dragged away by what appear to be Atlanteans - but not of the kind they know. Seeing them, one of the soldiers blows into a conch, which calls on a terrifying Krakken. However, with her powers regained, Kara steps forward and punches it out of the water, and beyond. It did, however, prove to be enough distraction that the Atlantean ship escaped with Mera.

It is clear to Mera immediately that this man is not her Arthur. He admits it, explaining that he hopes that in time, they will learn to forget about the differences, and embrace each other. He forces a kiss on her, and angrily, she punches him in the mouth. She warns that her friends will come for her, but he scoffs. He has already raised an army big enough to take on all of Gotham, and with his powers back, he can now command the creatures of the sea. Whomever she considers her defenders, he welcomes their challenge.

Retrieved from "https://heykidscomics.fandom.com/wiki/Convergence:_Justice_League_Vol_1_1?oldid=1431046"
Community content is available under CC-BY-SA unless otherwise noted.