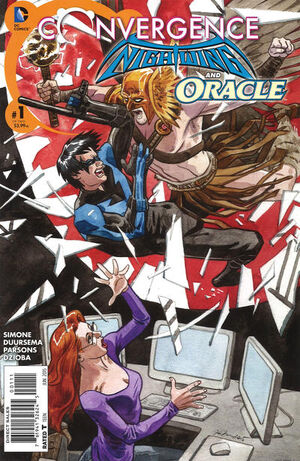 Human beings have that one bit of grace that sustains us all. We adapt. We adapt hard. We adapt to the unadaptable. We pitch tents in bombed-out craters. We turn parking lots into hydroponics labs. A dome comes down and seals off everything we've ever known beyond the city limits. What do we do? We adapt. And we adapted to the unadaptable.

Appearing in "Birds of RAGE"Edit

Synopsis for "Birds of RAGE"Edit

In the city of El Inferno, Hawkman and Hawkwoman of an alternate timeline and universe have just killed the Justice Riders mercilessly. They look to Brainiac's drones for guidance in who to destroy next, but get no answer. Uncaring, Hawkwoman simply challenges them to bring further champions, because warriors of Thanagar will not surrender if it means they can keep some shade of their world alive.

In Gotham City, Nightwing and Oracle have begun to adapt to their new way of life, under the dome. His impulsive nature is in conflict with her calculations and forethought, but that impulsive nature means he lives in the moment - which is what they both needed when they were forced to adapt. From her place in the Clock Tower, she guides him on a new mission to stop Mister Freeze at the museum. Unfortunately, not everyone adapted as well as Nightwing did. Even before Dick can gain the upper hand, Freeze abandons his robbery, simply giving up. The despair of knowing that there is no way to get out of the city - that he will never see any of the people who had lived outside it again - has taken its toll, and he has lost the motivation to continue.

Kind of depressed by the whole ordeal, Dick asks for some time alone, going radio silent for a time. After getting off-air, he meets up with Starfire, whom he confides in. He has something he's been meaning to do, but with the way things have gone, he isn't sure he has a right to do it. He isn't sure he has the right to be happy. Sighing, Kory reminds that he can't afford to fear happiness. He has this chance, and he should take it, because everyone needs to know that in this new state of affairs, something still matters.

After returning to Barbara, Dick is still a bit preoccupied. He is shaken by something she understands all too well. The reason Freeze surrendered was because he saw the pointlessness. He saw the track of the endless treadmill that they are now on. She can't bear to tell him, but she's beginning to feel the same way. Failing to sense it in her, he asks her to get dressed up, and insists on taking her out to dinner.

Barbara can't help but be down about the fact that the restaurant menus have been shrinking and becoming more bland, of late. With the lack of places to import from, it was Poison Ivy who saved everyone by growing food in Robinson Park. Part of her feels ashamed for having treated Ivy like a villain for so long.

Over dinner, Dick interrupts Babs' order to tell her how he feels about her. He explains that whatever happens in this world, he knows they can bear it if they have each other. Pulling a ring out of his pocket, he asks her to marry him. After a pause, though, she admits that she can't. Confused, he asks why, but she has no time to answer him, because the dome around the city suddenly vanishes. Internally, Barbara can't help but wonder if this is a sign that she should accept his proposal. Feeling free, for the first time in a while, the pair of them eat dinner outside, and enjoy themselves for an hour - but by the end of that hour, the invaders came.

Hawkman approaches Barbara and explains that he knows - thanks to all-seeing drone bots called Absorbascons - that she secretly runs Gotham, as they secretly ran their Gotham. While he knows also that there were other versions of he and Hawkwoman on Barbara's earth, he assures her that he is not that Hawkman. Hawkwoman explains their intent to kill everyone in the city for the sake of their own, and Barbara is sure she means it. Before Hawkwoman can finish her speech, Babs has Nightwing make a surprise attack. Unfortunately, he is not strong enough to take on this version of Hawkman alone.

Even so, Hawkwoman turns to Barbara and admits that she does not like rules. Thanagarians fight to win in a manner that allows no future resistance. For that reason, she offers a plan: she and Hawkman intend to abandon their weaker city, and let it be destroyed. If Barbara agrees, they will then be allowed to take refuge in this Gotham. Hawkwoman explains that she and Hawkman are all that remain of their Thanagar. If they die, regardless of which city they champion, it is the end of their Thanagar. The catch to the plan, though, is that this city will be ruled by them and remade in Thanagar's image.

Naturally, Dick outright refuses the offer, challenging her to battle, as was the original plan. She responds that if he goes along that line, he and his people will die. She gives him one hour to change his mind. He turns to Barbara, eager to prepare for battle, but she has to tell him no a second time this night. She hasn't got the will to fight beings like them. Incredulous, Dick leaves her to pick up weapons from the Batcave, intent on fighting with or without her.

As Dick leaves, Barbara gets out her laptop. She had been forced to feign fatalism because of the enemy's Absorbascons. The truth is that she does run the city, and while they gave her an hour to prepare for battle, she had already started fighting them ten minutes ago.

Retrieved from "https://heykidscomics.fandom.com/wiki/Convergence:_Nightwing/Oracle_Vol_1_1?oldid=1431050"
Community content is available under CC-BY-SA unless otherwise noted.