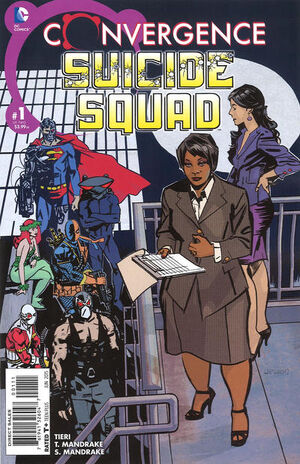 I know I will never rule my world. I've accepted that. So I have decided if I can't rule it...I'll watch it burn instead.

It's been some time since the dome came down around Metropolis, and separated it from the rest of the world, robbing any metahumans caught within of their abilities. Floyd Lawton's honed skills, though, are intact and in demand. For that reason, Toyman hires him to kill Superman for a million dollars. As the deal is being finalized, though, a voice rings out from beyond the dome, warning that the barrier will soon fall, and champions from other cities will be forced to battle for the survival of their homes. As soon as the dome falls, everyone's powers are returned - which means that killing Superman won't be possible. Rather than give Schott his money back, Floyd opts to shoot him dead and bite the bullet about the fact that he will now have to go and see Amanda Waller.

Amanda, meanwhile, has partnered with Oracle in monitoring Metropolis, and with the dome's falling, they are overwhelmed by signals and feeds from the other cities, beyond their own. In the confusion, it isn't surprising when General Lane asks to speak with Waller. He warns her that her new role as a councilwoman is of no use to him now, insisting that the more ruthless Waller he knew before the dome is needed. Her mission will be to ensure that Metropolis is defended from attackers from another city, populated by older versions of their world's heroes.

Her specific target, in this case should be the aged Green Lantern, whose power has increased since he absorbed his lantern into himself. His power is so great that he has created an entire floating city of green energy called New Oa. From it, he monitors and protects the city below, making it impossible to attack undetected. If Lane hopes to see New Oa fall, Amanda has to bring the Lantern down.

To aid Amanda in this mission, Carol Ferris offers her services as a Star Sapphire, unfortunately, they may have more difficulty in recruiting others. Waller has been given Bane, Black Manta, and Deathstroke to form her new Task Force X. Those available from the previous Suicide Squad have already been gathered - and they're not especially happy about being forced back onto the team. Sam Lane has one more surprise recruit, though - the recently recovered Cyborg Superman. After he destroyed Coast City, Amanda is reluctant to take him on. The team is rounded out by Barbara Gordon, who has already been set to work to engage one of Waller's own surprise recruits: the Lex Luthor from the enemy city.

Retrieved from "https://heykidscomics.fandom.com/wiki/Convergence:_Suicide_Squad_Vol_1_1?oldid=1431056"
Community content is available under CC-BY-SA unless otherwise noted.