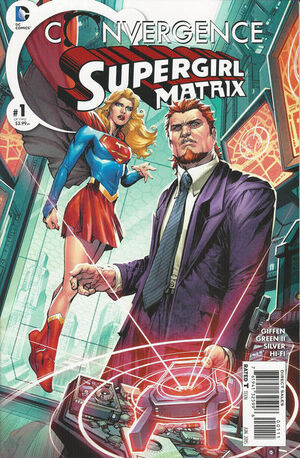 The milk of human kindness has officially soured.

Appearing in "Who the hell is Lord Volt?!"Edit

Synopsis for "Who the hell is Lord Volt?!"Edit

Since the dome came down, separating Metropolis from the rest of the Earth, Lex Luthor has been somewhat depressed about the fact that he was robbed of his pastime of plotting Superman's demise - by Superman's demise at someone else's hands. He has been carrying around a device for the whole year that he's been trapped, hoping that one day it would signal a change in the integrity of the dome. Today, sitting in Centennial Park with his reluctant friend Matrix, it finally reactivates, as a voice rings out above the dome, warning of the dome's imminent disappearance, and the challenge for all cities on Telos to present challengers to fight for their cities' survival.

Excited, but nervous, Lex has Matrix fly him to his lab where he searches for a way to ensure that they can leave the planet they've been imprisoned on, and avoid being imprisoned again. He hopes to discover the technology that brought them to this planet. Handing Matrix a device, he orders her to use it to track the energy source of the teleportation technology that captured them, and bring it to him or bring him to it before one of these other cities' challengers defeats her.

Meanwhile, in a place called The Verge, Lady Quark and Lord Volt observe the citizens of their opponent city, and feel unsympathetic toward them. Soon, they spot the Supergirl, and accost her, promising a thrashing. Their bickering, though, proves a useful distraction in allowing her to return to her mission of finding the energy source. Unfortunately, the device Lex gave her doesn't seem to be working. By the time it does start making noises, Quark and Volt are back, promising that they're ready for her - but she has to follow the signal. They warn that she'll have to go through them, and seeing no other way, she punches Lord Volt in the face. In response, Lady Quark damages the device, further frustrating Supergirl, who telekinetically knocks her across the city.

Fortunately the device comes alive again, and Supergirl follows it until Lex's voice comes through it, berating her. Angrily, she drops the device, letting it smash - realizing too late that she's just destroyed the only hope of getting off the planet. Determined to get Lex off of her back, she wonders if other cities will give her sanctuary. A nearby voice warns that she shouldn't bet on it. Turning, Supergirl sees Ambush Bug, and admits that she's glad to see him.

Retrieved from "https://heykidscomics.fandom.com/wiki/Convergence:_Supergirl:_Matrix_Vol_1_1?oldid=1431059"
Community content is available under CC-BY-SA unless otherwise noted.