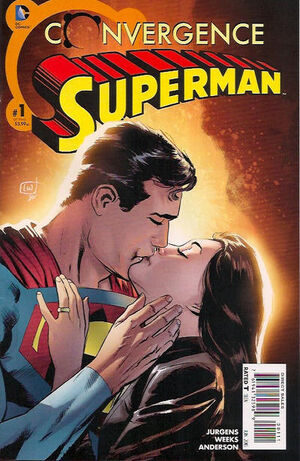 I thought that world... that timeline would replace ours. If it meant my son would live again-- so much the better. But we weren't replace. We survived. And them? If Bruce is alive... how do I fight them?

Robbed of his super-human powers by the dome around Gotham City, Clark Kent tries to continue to fight crime without them, aided from afar by quite pregnant Lois Lane. As he tries to fight off a gang of thugs, hoping to channel the skill and expertise of his friend Batman, a voice from beyond the dome suddenly rings out over the city. Lois warns him to ignore it, so he doesn't get himself killed. Though he keeps fighting, his failure to listen to the voice prevents him from hearing the news that saves his life: the disappearance of the dome heralds the return of his powers. As such, he is barely spared being burned to death by a mad thug with a flamethrower. Superman is back.

Jimmy Olsen, who was excitedly watching the fight before, finds himself taken hostage by crooks who realize they've lost the upper hand. Before they can react, though, Superman has grabbed Jimmy away from them and taken him to safety. The three Metropolitans had been stuck in Gotham ever since the dome appeared while they were there for a news convention. Superman warns Jimmy that he doesn't have time to talk about it, intending to investigate the dome's removal.

He first goes back to Lois, who is hopeful that the dome's disappearance means that they can have their baby in Metropolis - and the baby is coming soon. She warns him, though, not to cheat with his recovered X-Ray vision and tell her whether it's a boy or a girl. Despite getting cut off from the world for a year, the pair of them have been happier than they've ever been. Still she wonders what the voice thing was all about. Clark assures her he'll check it out later, but asks to enjoy the moment for now.

Having thought ahead, Lois recorded the voice, and once he's ready, she plays it back for Superman. From the recording he learns that when the dome came down, they were taken off of Earth to another planet. The planet that was theirs is dead. They will now have to act as champions for what remains of their world's people, and fight other cities' champions for the right to exist. Worriedly, Clark knows he must get to work, and Lois prepares to give him backup from home.

Superman flies up high, and sees with his telescopic vision that there are cities taken from a variety of worlds, all laid out on the planet's surface. He hopes, though, that he can find away to avoid the fighting that was called for.

Meanwhile, in the Gotham City of another timeline, its Batman warns his allies that they must prepare themselves for a war. Even if they don't want to fight, a being who is capable of imprisoning them on the planet without their powers is surely just as capable of forcing them into battle. As Batman picks up an incoming flyer coming in fast from another Gotham, he warns everyone to assume the worst, and fight for their lives.

Meanwhile, at S.T.A.R. Labs, Jimmy confers with Emil Hamilton regarding the voice's words. He wonder's what the voice has to gain from making the cities fight - and why it would choose Gotham over Metropolis. Dr. Hamilton suggests he leave those questions to be answered by other men. Jimmy admits he prefers to do that, and explains his intention to leave the dome and get some pictures of the beings from other worlds. Dr. Hamilton intimates that he might have a vehicle that will be of use to Jimmy in that regard.

As Superman flies toward the other Gotham, he notes that it seems to be worse than the one he's leaving. Suddenly, he is bowled over by a being faster than he could perceive - someone ranting about a woman he has seen alive in another city. Clark warns Lois that whoever it was, he's heading her way. He is suddenly tackled, though, by Captain Thunder, who is insistent that he won't let an enemy who strikes first get the better of him. Superman knocks him back, begging to be heard, but further heroes from this other Gotham come at him. Desperately, Superman tries to reason with them, and nearly succeeds, before Jimmy arrives in a jet-propelled car, frightening the reluctant attackers into confidence that Jimmy and Superman are the enemy.

The other Batman monitors from afar as his Kryptonian Kal-El seeks out Lois Lane. He realizes that the opposing Gotham might be the world of Barry Allen - the Flash of another timeline. He had hoped that when Barry went back in time, that his own timeline would be over-written. He'd hoped that he would be gone, and his son would live again. Somehow, he still exists, though - but if his son exists in this other Gotham, he isn't sure he could bring himself to fight them.

Kal-El breaks down the door to Lois' apartment, and insists that he is there to save her. He warns that her city is going to die, and he won't let her die with it. Desperately, Lois calls to her Superman for help, as he is overwhelmed by the angry citizens of the alternate timeline.

Retrieved from "https://heykidscomics.fandom.com/wiki/Convergence:_Superman_Vol_1_1?oldid=1682889"
Community content is available under CC-BY-SA unless otherwise noted.