Part of the 'Convergence' event 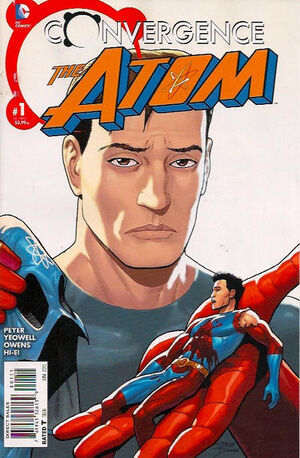 If my mental stats is so repellent to you, shouldn't I at least consider embracing it? What if I'm not losing my mind? What if the voice isn't an illusion?

Appearing in "Inside the Atom"Edit

Synopsis for "Inside the Atom"Edit

It's been a year since an impenetrable dome surrounded Gotham City, and it was removed from the earth's surface. While the adults have begun trying to accept their plight, youths are seeking adventure in dangerous activities, and it falls to The Atom to seek adventure in rescuing them.

Despite having lost his ability to shrink over the past year, Ray has retained a strange and singular power to grow only his right hand very large - and he can't imagine why. Along with it has come an irritating voice in his head. As he frees some reckless kids from being trapped under rubble, they back away in horror from the sight of his horrific hand. The voice tries to comfort him, but it's no use. With the news crews converging on the building, they are disappointed to see Ray emerging from it. His apparently deteriorating mental state has is well-known to this reporter, and she tries to brush him off, but he grabs the microphone, demanding to know first where his mass goes when he shrinks?; second, what is up with his hand?; and third, what is justice? He begins ranting about the murder of Ryan Choi at Deathstroke's hands, and insists that he will only have justice when he makes Deathstroke pay. As it happens, Slade Wilson - under the assumed name of Cassius Wilde - is watching, and if the Atom is going to keep bandying about his real name on live TV, then the Atom needs to die, too.

Later, Ray thwarts a purse snatcher, but upon checking his watch, realizes that he's about to miss his bus. Hurriedly, he runs across the city to meet with Maria, a restaurateur he happens to like. Grateful for his efforts in protecting the neighbourhood, she has packed him a dinner of his favourite meal - taco salad. He eats it on the front step with her, and she comments that taco salad is her daughter's favourite too. Interested, he asks where Maria's daughter lives, and the woman's heart sinks as she admits that he daughter was in Buffalo, New York - which they are now light years away from. Still, she remains positive, and Ray wonders how she manages it. She explains that after a whole year of living under the dome, she has come to believe that their captor doesn't intend to hurt them. They're just bugs in a jar.

Suddenly, Ray stops her mid-sentence, explaining that he hears something. Instinctively, he tugs her out of the way as an explosive hits the steps they were just sitting on. Seeing that the explosion was Deathstroke's doing, Ray warns Maria to run for her life. Disgusted, Deathstroke notes that Ray almost seems happy to see him. Grinning, Ray admits that settling accounts for Ryan's death are all he's wanted ever since. Just as Ray raises his increasingly large fist, though, a voice from beyond the dome rings out over the city. It explains that the dome will be removed imminently, and that champions from all of the cities on the planet Telos must rise and fight for the survival of their homes.

Suddenly, Ray is teleported to another place - and robbed at his chance for retribution. To his surprise, he can shrink again - but as his mind is deteriorating more rapidly, he worries that he just lost his chance to bring Deathstroke to justice forever. The voice in his head suggests that he should concentrate on saving Gotham instead. From whom, he wonders, but the answer becomes clear soon. From a pool before him emerges the monstrous Barracuda, most vicious of the death squad known as the Extremists. The creature thrusts his trident into Rat's enlarged hand, and unexpectedly, his real hand pops right out of it. Taking the opportunity, he shrinks away from the trident's reach. Leaping onto Barracuda's head, with the full weight of a normal-sized man, Ray drops the creature onto his back, and demands to know why they are fighting each other when they should be fighting the person making them fight. Barracuda swats him under his palm, admitting that this is easier.

Ray dodges the blow, but begins arguing with the voice in his head, prompting Barracuda to assume that he's a lunatic. Ray admits that he might just be a lunatic, but if his mental state is so repellent to his opponent, he is considering embracing it. What if, after all, it hasn't been an illusion. From behind him, a voice reminds that that's what he'd been trying to explain to Ray. Turning around, Ray sees that Ryan Choi is alive after all.

Retrieved from "https://heykidscomics.fandom.com/wiki/Convergence:_The_Atom_Vol_1_1?oldid=1431063"
Community content is available under CC-BY-SA unless otherwise noted.