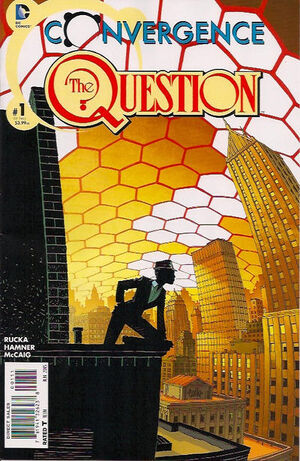 It's an interesting question: When you're living in a cage... What's there worth living for, anyway?

Renee Montoya sees the dome for what it is - a cage. She had lived in a Gotham not unlike this, years ago, in what was called a No Man's Land. Like then, the people became like rats, and those who had nothing would fight for everything, whether they needed it or not. She has taken it upon herself to stop looters and medical supplies and food - but she can't help but feel like there is no difference between her and the looters, besides her feeling of moral superiority.

She and Harvey Dent stop some looters in a pharmacy, and gather supplies to take to St. Luke's, though she still doesn't completely trust Harvey after all they've been through. After coming through for her here, though, she is grateful. As she leaves with the supplies - alone - he takes a moment to apologize for what happened to her father.

Hernando Montoya is in a vegetative state at St. Luke's, and Renee drops off the recovered Morphine, asking that her father receive a dose of it. Despite her feelings that there might be nothing worth living for, she is still pained by the looming shadow of death in her family. And even if the pain her father is in seems just like another cage, she doesn't yet want to set him free by letting him die.

Later, The Huntress returns to her shared apartment with Renee to find her checking her face for the mark. Helena assures her it won't be coming back, but Renee isn't so sure. After hearing about Two-Face's help in getting the morphine, Helena is worried, reminding Renee that Two-Face can't be trusted. Renee responds that it's not his character that she's having difficulty with, putting on her hat and excusing herself.

Elsewhere, Harvey takes his coin in hand, and a gun in the other. He places the gun barrel to his temple, and flips the coin, catching it in the air and awaiting his fate. Grumbling, he sees that it's heads again, and he won't be allowed to kill himself. From behind him, The Question promises that it isn't her doing. He responds that it doesn't matter, because he will try again tomorrow all the same. As far as he is concerned, this dome has already robbed him of a life. Still, he wonders if she'd try to stop him if the coin came up tails tomorrow. The Question responds that she wouldn't just try, she'd succeed. Frustrated, he demands to know who she is, and why she doesn't fear him. He could kill her now, without much effort. She suggests he flip for it - but decides instead to do it for him, snatching the coin from his hand. Worriedly, he begs her not to do it, and she tosses the coin. He leaps for it, catching it in his own hand, and sees, once again, that it came up heads. He cries out, wanting to know why this keeps happening. She responds that that is the Question - and admits that she doesn't know the answer.

Looking more closely at her featureless face, Harvey begins to sense that he knows her, but before he can pry further, a voice from beyond the dome rings out, warning that the dome will soon recede, and they will have to select champions from their city to battle champions from other cities for survival. Hearing this, Harvey reaches for his gun, and explains that if there is another Harvey Dent from another world, maybe he can finally get what he wants, and have his other self kill him, when he can't'. The Question tries to warn him not to do it, and he suggests again, that they flip for it. With the dome removed, though, Renee suspects that the odds will have changed. He flips, and it comes up tails. With that, he takes the gun and clubs her upside the head, knocking her unconscious.

Eventually, Huntress locates her, and gives her an I-told-you-so about Two-Face's duplicity. Ignoring her, Renee warns that they have to find Harvey and stop him. Having already anticipated that need, though, Helena called in some backup in the form of Batwoman.

Retrieved from "https://heykidscomics.fandom.com/wiki/Convergence:_The_Question_Vol_1_1?oldid=1431065"
Community content is available under CC-BY-SA unless otherwise noted.