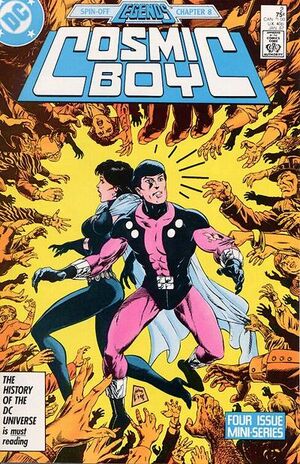 We're reduced to hiding who we are! That's the craziest idea I've seen in this insane century!

Appearing in "Is History Destiny?"Edit

Synopsis for "Is History Destiny?"Edit

Cosmic Boy and Night Girl continue investigating the problems with history. Night Girl is annoyed that this is ruining their vacation to the 20th Century. Cosmic Boy pours through newspapers and says that every fact he's ever learned about this era has changed. He believes that someone must be behind such a wide-scale change.

They get on a primitive 20th Century plane to Houston so they can visit NASA. Using their powers, they break into the facility to find information. Instead, they find a scientist named Jason who is waiting for them. Jason explains that he designed the space shuttle they stopped. He is curious what their interest in it is. Cosmic Boy explains that they are trying to help the space program, but does not reveal he is from the future. Jason tells them that the shuttle's malfunction was an accident, not the result of tampering as Cosmic Boy believed. WHIZ TV news tells them that Brimstone has been destroyed, but the anti-hero riots lead by G. Gordon Godfrey are getting worse.

The NASA facility is surrounded by angry protesters, who don't want nuclear devices in space. The protesters chant that America should fix its own problems before turning to space. They begin getting violent, and the security guards are unable to stop them storming the facility. The mob decides to destroy the facility, and they begin beating up scientists. Cosmic Boy and Night Girl help fight the crowd, still in civilian clothes to hide their identities. Finally Cosmic Boy has enough, and says that he is tired of hiding who he really is. He believes that whoever is trying to change Earth's history is also responsible for forcing the heroes into hiding, and he will not cooperate. Cosmic Boy and Night Girl fully use their powers to quell the riot, sending protesters fleeing.

The police finally arrive. Cosmic Boy and Night Girl leave quickly to avoid arrest. Jason is questioned and he says that he cannot explain what happened. Cosmic Boy laments that he didn't find any clues. However, men like Jason make him confident that Earth will reach the stars someday. Cosmic Boy reminds Night Girl that both of their families come from worlds settled by the great emigration of Earth. If they don't fix the problem with their ancestors, it is possible Cosmic Boy and Night Girl will never be born. It is revealed that Jason's last name is Krinnski, implying that he is actually one of Cosmic Boy's ancestors.

Retrieved from "https://heykidscomics.fandom.com/wiki/Cosmic_Boy_Vol_1_2?oldid=1419752"
Community content is available under CC-BY-SA unless otherwise noted.