Part of the 'Legends' event 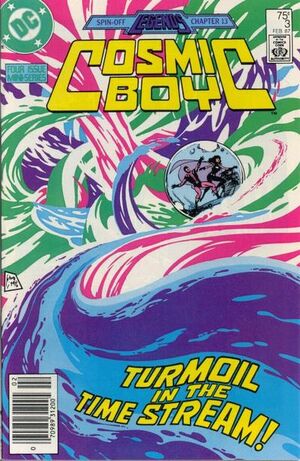 Welcome to the end of everything, children. It will be a great pleasure to watch the sands of your lives run out.

Appearing in "Past, Present... and Future"Edit

Synopsis for "Past, Present... and Future"Edit

Having used up the last of their medi-kits, Cosmic Boy and Night Girl are forced to end their vacation in the 20th Century. They visit the park in Metropolis where they hid their Time Bubble, and pull it out of the ground. Cosmic Boy worries that they won't be able to get back to their own time, because the timestream is in flux. They need help from the rest of the Legion of Super-Heroes.

The entire history of the 20th Century needs to be rewritten. They enter the timestream, but they hit a wall that they can't break through. The Time Bubble begins shaking, and they crash back into 1986. Night Girl wears a sling for her broken arm. The Time Bubble has been damaged. They have no one to ask for help, since Earth's heroes are busy dealing with G. Gordon Godfrey.

Jason Krinnski takes a leave of absence from his job at NASA to help Cosmic Boy and Night Girl. They stock up at a supply warehouse, and try to repair the Time Bubble using physics that are only theoretical in the 20th Century. This makeshift fix seems to work. Cosmic Boy and Night Girl thank Jason profusely, and he drives away. They enter the timestream again and find it still difficult to move through. Cosmic Boy says that it's like there's a barrier between the 20th Century and the future. They land in the 20th Century again. Cosmic Boy determines that they need more power to punch through this barrier, but no power source on Earth would be enough. He realizes that he can generate enough power by tapping into Earth's magnetic fields. They enter the atmosphere and circle the Earth several times, building momentum until they can reenter the timestream. This sends them going too fast, and they are unable to stop in the 30th Century. The Time Bubble careens onward through the future, until they crash land. They have reached the End of Time. Cosmic Boy tells Night Girl that he should have realized what was happening all along. They are greeted by the Time Trapper, who says it will be a pleasure to watch them die.

Retrieved from "https://heykidscomics.fandom.com/wiki/Cosmic_Boy_Vol_1_3?oldid=1419753"
Community content is available under CC-BY-SA unless otherwise noted.