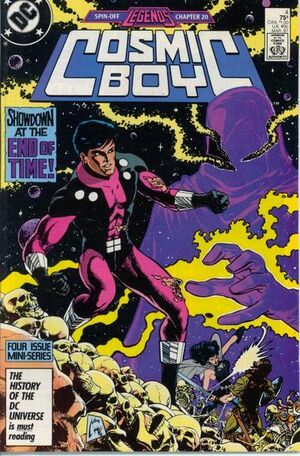 Find your way back to your century in those sixty minutes, and you may live in fear until I reach back to destroy your epoch. Fail, and you shall serve me until your bones crumble.

Appearing in "Time Without End"Edit

Synopsis for "Time Without End"Edit

Cosmic Boy and Night Girl are greeted at the End of Time by the Time Trapper. Time Trapper tells them that his plans are too complicated for them to understand. Night Girl tries to attack Time Trapper, but she has not met him before and doesn't understand his powers. The Time Trapper disappears and she punches an empty cloak. Suddenly Night Girl is pulled through a portal, and Cosmic Boy leaps in after her. They find themselves inside the Trapper's citadel. Time Trapper reminds them that the existence of an "End of Time" proves he has already won. Despite this, he is not content. He wants to expand his domain by extending the end of time backwards until it meets the beginning of time. He explains that there's no need for anything in between, and mortals only "clutter it up." The Time Trapper decides to give Cosmic Boy a sporting chance. He stars an hour glass, giving them sixty minutes to escape. If they can make it back to their own time, he won't pursue them. If they fail, they will become his slaves forever.

They are transported outside the citadel, with their Time Bubble still inside. Using their combined powers of magnetism and super-strength, they break through the walls. The citadel is filled with traps and monsters, but they valiantly fight through. Eventually they decide to split up and go into two different tunnels. Both of them are attacked by the Time Trapper's minions, who are warriors gathered from throughout history. They finally break into the throne room just as time is running out. The Time Trapper arrives and shows them that the hourglass is almost drained. Cosmic Boy uses his powers to twist the hourglass, so it can never empty. This amuses the Time Trapper, and he decides to let Cosmic Boy and Night Girl escape on the technicality. They climb into the Time Bubble and return to the 30th Century. Time Trapper tells them it will be their final journey through time. The end of all time is coming. When Cosmic Boy and Night Girl land in their Metropolis, they rush to tell the rest of the Legion.

Time Trapper strolls through the corridors of his citadel, narrating his plans out loud. He knows that Cosmic Boy will return with the rest of the Legion. The Trapper remarks that Cosmic Boy does not realize time itself is already stacked against him. It is revealed that the Trapper is in possession of a Krypto and Superboy. The Legion are known to remember Superboy, but Superboy does not exist in the actual historical timeline.

Retrieved from "https://heykidscomics.fandom.com/wiki/Cosmic_Boy_Vol_1_4?oldid=1419754"
Community content is available under CC-BY-SA unless otherwise noted.