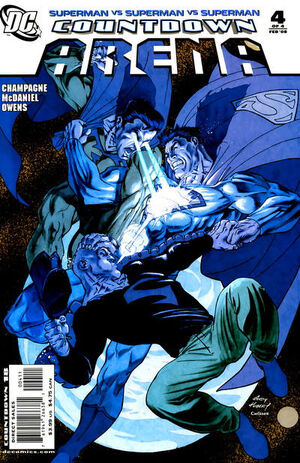 The Monitors are waiting. Let us make war.

Appearing in "All Fall Down"Edit

Synopsis for "All Fall Down"Edit

Monarch sent the final combatants, the Supermen into the Arena and decides to search for Captain Atom of the Atomic Knights, Quantum Storm, and The Bat who are attempting to free the other prisoners.

In the Arena, the Supermen makes their vows and decides to fight against each other. Christopher is immediately knocked away by Superman-31, as Superman-31 fights his Soviet counterpart and bringing both of them into the ground of the Arena and penetrating to the outside of the Arena. They are then almost succumb to radiation poison but are save by Chris.

Meanwhile, in the stasis prison in Monarch's satellite, The Bat, Captain Atom and Quantum Storm tries to fight their way through a large number of Monarch's soldiers to the prisoners but are confronted by Monarch. He reveals that he had deliberately planted the teleporter for Earth-33's Ted Kord to assemble to give the group false hope, and also that Breach had been working for him all along and was in fact New Earth's Breach, who had survived the Infinite Crisis and been brainwashed into working for Monarch; furthermore, the plan of enlisting the alternate Captain Atoms was Monarch's true intention of harnessing and absorbing their power. Monarch then proceeds to murder the Bat and the Captain Atoms, adding his counterparts' power to his own. After absorbing Quantum Storm and Captain Atom, Monarch commands his soldiers to prepare for his "crusade".

Back in the Arena, after Chris absorbs the radiation from the Supermen allowing him to be more powerful, and then informs his counterparts that Monarch is watching above of the Arena, and plans to attack him until the time comes. The trio again battle, with Chris absorbing enough of the other two's powers to become a glowing red giant, who tries to destroy Monarch and fails, killing himself in the attempt. The proceedings are then interrupted by Breach, who has brought with him every other version of Captain Atom in the Multiverse. Monarch proceeds to kill each and every one of them, adding their atomic power to his own. During the confusion, Superman-31 is given Ted Kord's harness by Breach, who had managed to free himself from Monarch's control, and then tells Superman that it is impossible to stop Monarch as he has the advantage and convinces him to leave. After having kill his last counterpart, Captain Atom (Earth-4), Monarch confronts Breach and accuses him for "treason" but decides he is dead either way from the very beginning. Monarch then kills and absorbs Breach, and later all the bodies of the Captain Atoms and the entire Arena. Monarch then transports Superman-30 and himself back into his satellite.

After arriving in the stasis room, Monarch surprisingly discovers his soldiers guarding the prison are beaten and finds the prisoners are gone and a large carved 'S' symbol on one of the prison's walls, revealing that the prisoners were rescued by Superman-31. Monarch destroys the emblem in spite, but considers that he has "everything" he needs and declares his awaiting war against the Monitors.