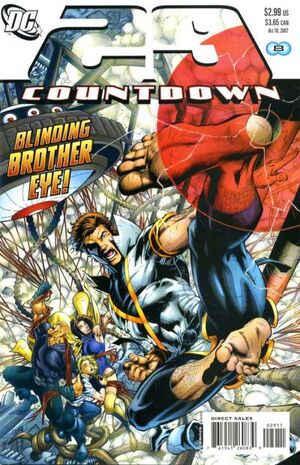 Appearing in "Another Country Heard From"Edit

Synopsis for "Another Country Heard From"Edit

Synopsis for "The Origin of the Penguin"Edit

The Penguin was born Oswald Cobblepot and lived with his overprotective mother in a pet shop in Gotham City. Mrs. Cobblepot insisted that her son never leave the house without his umbrella, for fear that he might die of pneumonia as his father did. This, in combination with Cobblepot's plumpness and pointed nose earned him the cruel nickname - the Penguin. As an adult, Cobblepot became a powerful criminal mastermind, though now he alleges that he has gone legitimate, working exclusively out of the parlor of his Iceberg Lounge.

Retrieved from "https://heykidscomics.fandom.com/wiki/Countdown_Vol_1_29?oldid=1697848"
Community content is available under CC-BY-SA unless otherwise noted.