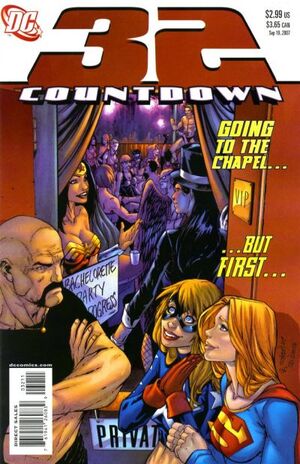 Synopsis for "The Origin of Eclipso"Edit

The being known as Eclipso was the original spirit of vengeance. As the essence of God evolved between the Old Testament and the New Testament, Eclipso was stripped of power and imprisoned inside of an Apokoliptian black diamond known as the Heart of Darkness. Eclipso's successor became known as the Spectre. Over the years, Eclipso's corruptive influence touched those who came in contact with the Heart of Darkness including Bruce Gordon, Alex Montez, and more recently Jean Loring. As the latest host for Eclipso's evil influence, Jean Loring has been slowly corrupting the re-empowered Mary Marvel.

Retrieved from "https://heykidscomics.fandom.com/wiki/Countdown_Vol_1_32?oldid=1690684"
Community content is available under CC-BY-SA unless otherwise noted.