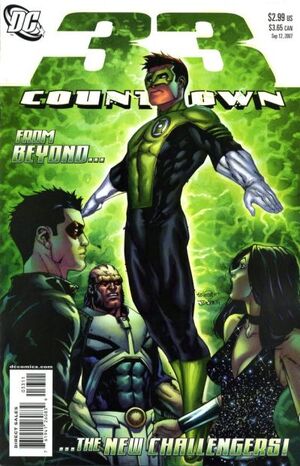 Appearing in "Let's Make a Deal"Edit

Synopsis for "Let's Make a Deal"Edit

Synopsis for "The Origin of the Riddler"Edit

Edward Nashton always loved puzzles, but also liked to cheat to achieve his ends. Nashton lived his life by tipping the odds in his favor, and eventually located to Gotham City where he adopted the criminal code name the Riddler. As the Riddler, he came into conflict with Gotham's guardians Batman and Robin on several occasions. After an encounter with a villain known as Hush, Nashton learned that the Batman was actually Bruce Wayne. A subsequent head injury later however, robbed him of this memory, and he has since reformed from a life of crime and now works as a private investigator.

Retrieved from "https://heykidscomics.fandom.com/wiki/Countdown_Vol_1_33?oldid=1661272"
Community content is available under CC-BY-SA unless otherwise noted.