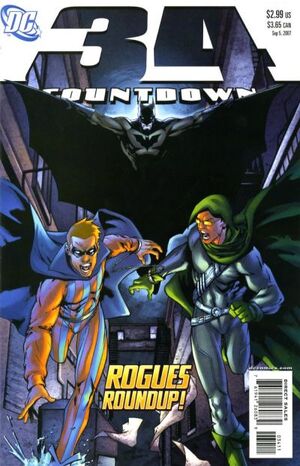 Appearing in "Searching for Answers"Edit

Synopsis for "Searching for Answers"Edit

Synopsis for "The Origin of Lex Luthor"Edit

Although born the son of a Metropolitan mover and shaker, Lex Luthor spent a great deal of his youth growing up in Smallville. There, he became acquaintances with Clark Kent, Pete Ross and Lana Lang, but never developed any true friendships. As an adult, he took control of his father's company LexCorp and eventually became one of the most powerful men on the planet. He even served a term and a half as President of the United States until scandal forced him to resign. Throughout his illustrious career both as a corporate mogul and a criminal genius, Luthor always found himself suffering defeat at the hands of one man -- Superman.

Retrieved from "https://heykidscomics.fandom.com/wiki/Countdown_Vol_1_34?oldid=1691685"
Community content is available under CC-BY-SA unless otherwise noted.