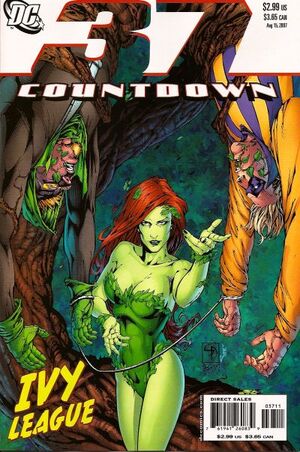 Synopsis for "The Origin of Poison Ivy"Edit

Scientist Professor Jason Woodrue used Pamela Isley as test subject to create a human/plant hybrid. The experiment worked only too well however, and Isley emerged as Poison Ivy. With the ability to produce pheromone pollen and control plant life, she became a recurring foe of the Batman - the one male adversary that she could not seduce. Through the course of her career, Ivy has developed a close friendship with former Joker sidekick Harley Quinn. The most trying moments of Ivy's life was during the Harvest, when a hybrid creature germinated from her victims. Invariably, her criminal lifestyle always lands her back at secure room at Arkham Asylum.

Retrieved from "https://heykidscomics.fandom.com/wiki/Countdown_Vol_1_37?oldid=1697845"
Community content is available under CC-BY-SA unless otherwise noted.