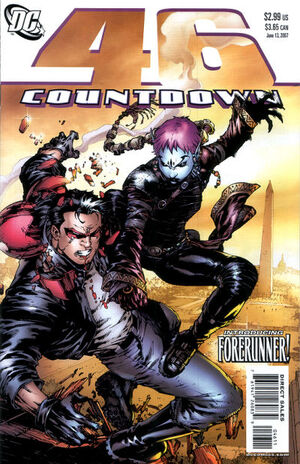 Appearing in "Weapon of War"Edit

Synopsis for "Weapon of War"Edit

Synopsis for "History of the Multiverse (Part IV of XII)"Edit

The Monitors continue to review the history of the Multiversal realities known as Earth-One and Earth-Two. They pay special attention to events wherein people from one reality permanently migrated to the other. Specifically, they focus on the Red Tornado and the first Black Canary. The Red Tornado was originally created by Professor T.O. Morrow on Earth-One, where he was designed as a villain. After reforming and becoming a hero, the Red Tornado migrated to Earth-Two where he became a member of the revised Justice Society of America. The Black Canary was originally from Earth-Two, but following the death of her husband Larry Lance at the hands of Aquarius, she took up residence on Earth-One and became a member of the Justice League of America. The Monitors also take notice of two other teams of heroes known to journey from reality to reality. The Seven Soldiers of Victory were originally from Earth-Two, but were lost in the time stream until eventually emerging again on Earth-One. The Freedom Fighters were a team of heroes who fought in the reality known as Earth-X – a world where World War II never ended, and Hitler's Nazi forces invaded the United States.

Retrieved from "https://heykidscomics.fandom.com/wiki/Countdown_Vol_1_46?oldid=1697841"
Community content is available under CC-BY-SA unless otherwise noted.