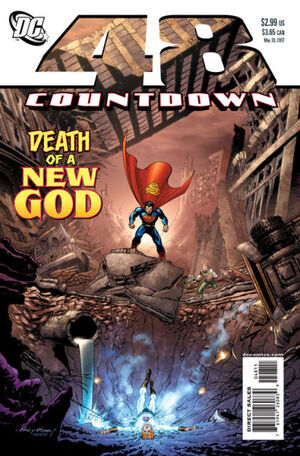 Appearing in "Death from Above"Edit

Synopsis for "Death from Above"Edit

The Monitors continue their evaluation of the history of the Multiverse. They recall the second instance wherein citizens from Earth-Two visited Earth-One. One of the earliest examples involved Vandal Savage and the time that he held the entire Justice Society in suspended animation. The Justice League of America (along with Jay Garrick), managed to rescue them in the first of what would become many team-up adventures between the Justice League and Justice Society. Once a year, the two teams would visit one another to resolve one earth-shattering "crisis" after another.

Retrieved from "https://heykidscomics.fandom.com/wiki/Countdown_Vol_1_48?oldid=1697840"
Community content is available under CC-BY-SA unless otherwise noted.