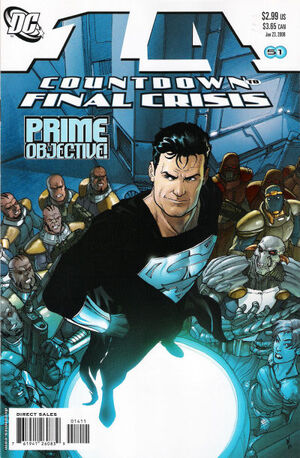 Appearing in "Choke On It!"Edit

Synopsis for "Choke On It!"Edit

Synopsis for "The Origin of Gorilla Grodd"Edit

Years ago, an alien space craft crash-landed in the jungles of equatorial Africa. Gorillas surveying the crash site were exposed to an alien gem that greatly enhanced their intellect, forcing their evolution into a race of "super-gorillas". Two of the apes present were Solovar and Gorilla Grodd. While Solovar became a kind and benevolent leader, Gorilla Grodd used his newfound mental powers to become a conqueror. His quest to turn the entire planet into a Gorilla City brought him into numerous conflicts with the Flash, as well as the Flash's teammates in the Justice League of America.

Retrieved from "https://heykidscomics.fandom.com/wiki/Countdown_to_Final_Crisis_Vol_1_14?oldid=1661254"
Community content is available under CC-BY-SA unless otherwise noted.