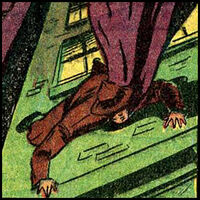 The Crawler worked for gangster Joe Chizzler. Both were part of an insurance scam. For his part, The Crawler would literally crawl down a building's rooftop and tap on windows. If the the unsuspecting victim leaned out the window, the Crawler would push them down below to a grim death, hoping the police would think it was a suicide.

Bob Phantom caught on to the scam and chased the Crawler who fell from a rooftop. Later, Bob killed Joe Chizzler by throwing him out a window.