Hey Kids Comics Wiki
Register
Don't have an account?
Sign In
Advertisement
in: Movies and TV Based on EC Comics, Creepshow 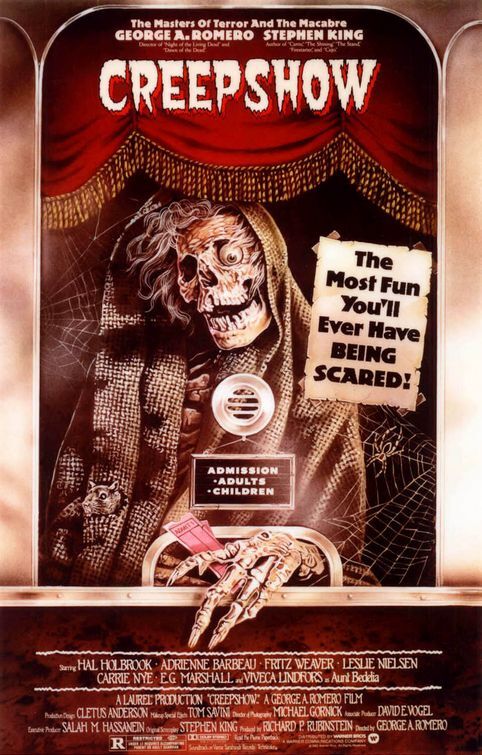 Creepshow is a 1982 horror anthology film written by Stephen King and directed by George Romero. The film is an homage to the EC Comics horror series, such as Tales From The Crypt.

Creepshow, being a tribute by the fans for the fans of the EC Comics, appropriately opens on a suburban home during the Halloween season. A father is scolding his son Billy for reading the "rotten" comic Creepshow (an EC-like horror comic) and threatens to punish him severely if he ever finds him reading such a comic again.

While the father feels satisfied about his decision, Billy seethes in his room. At that moment, the Crypt Keeper-like Creep appears in Billy's window, with the latter being clearly amused, and an animation sequence opens with the credits, ending with a peek inside the comic that transitions to reality.

The first story concerns the Grantham family, whose matriarch Great Aunt Bedelia killed her demanding father Nathan in a rage seven years ago on Father's Day. The Granthams are quite happy about the death of the miserly Nathan, which allowed them to inherit his fortune, but this year things go differently; Nathan rises from his grave as a vengeful zombie and begins killing off his relatives one by one in a quest for his "cake".

The Lonesome Death of Jordy Verrill

The second story revolves around Jordy Verrill, a backwoods hick who, after being infected by the juice inside a meteorite that crashes in his yard, gets a little more growth out of his plants than he can handle.

Something To Tide You Over

Richard Vickers, a rich and jealous husband, decides to get revenge on his cheating wife Becky and her lover Harry in a creatively cruel manner, but learns too late that the tide has a way of bringing things back.

A patsy professor sees the release of a dangerous creature from a crate delivered to his college as a surefire way to rid himself of his monster of a wife.

They're Creeping Up On You

Upson Pratt, a mean old business tycoon with a fear of insects, gets bugged by roaches after he causes the suicide of an employee.

The next morning, two garbage collectors find the Creepshow comic Billy's father threw away, noting that the coupon for a voodoo doll has been ripped out. Meanwhile, the father himself is having some major neck pain. As he collapses from said pain, we learn that Billy is stabbing his new voodoo doll over and over, this act fading to the cover of another issue of Creepshow being read by none other than The Creep.

Creepshow spawned a sequel, Creepshow 2, in 1987, which had only three tales of terror instead of five. The wraparound story follows Billy as he is harassed by bullies (eventually getting even with man-eating venus flytraps), and the stories deal with a vengeful cigar store indian ("Old Chief Woodn'Head"), four teenagers stranded on a raft by a hungry blob ("The Raft"), and an upper-class woman who is haunted by the ghost of a man she killed in a hit-and-run ("The Hitch-Hiker").

Tales From The Darkside and Monsters

Taurus Entertainment, who owned rights to Creepshow (hence the name having to be changed to Tales From The Darkside) made their own unofficial sequel, Creepshow 3 in 2006 with no involvement from King or Romero. Despite its poor reception, Taurus is in the process of producing a tv show called Creepshow: RAW, having already filmed the first episode.

Warner Bros. is also working on a "remake" of Creepshow, Creepshow 4, although rumors speculate that the story will actually be a continuation in which Billy, now grown and proudly working for Creepshow Comics, is on the verge of losing his job due to poor material and given just one night to come up with five shocking tales for the next issue.