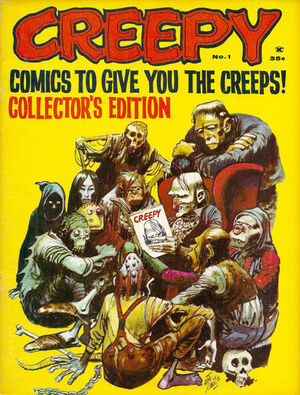 1 of 3
Add photo
The story is about a man who throws out his voodoo practicing wife. He later finds her in the woods and a struggle ensues in which her head is chopped off. Before long however her headless corpse, with a shrunken head attached chases after him!

A pair of divers come across an underground civilization. There they meet the mutated people who live there, who force them to forget that they ever encountered them.

Appearing in "Vampires Fly at Dusk!"Edit

Synopsis for "Vampires Fly at Dusk!"Edit

The story takes place in a town plagued by murders, suspected to be by a vampire. A man is suspected to be a vampire, particularly by his wife who finds that he'll only let her do things at night. One night she finds him missing from his study and she pulls back a curtain, revealing the sunlight which she hopes to destroy him with. Only it ends up that she was the vampire; while he was killing the people in the town, he was feeding the blood to her in her food. Due to the sunlight she dies.

1 of 6
Add photo
This story features a big game hunter heading after a werewolf like creature that oddly enough hasn't killed anyone. He finds it and shoots it, but this causes the werewolf to turn back into a human. The man thanks him for breaking the curse, saying he's been looking for someone to do this for years. By dying he passes on the curse to the hunter, who now becomes a werewolf himself.

1 of 3
Add photo
A man buys some material which when burned is rumored to kill a witch. He soon finds himself pursued by a dinosaur and other bizarre events keep happening. He wakes up, finding it to be a dream, but then finds his daughter with a voodoo doll of him!

Appearing in "The Success Story"Edit

Synopsis for "The Success Story"Edit

This story features a comic strip creator, Baldo Smudge who is actually ripping off three separate people. He hires a penciler, whom he tells he is doing the inking and writing for. He also hires a writer whom he tells he is doing the penciling and inking. And so on for the inker. All the while he takes the credit for the strip as a whole. This charade goes on for a long time, but the three of them finally catch on, so Baldo kills them. They come back as rotting corpses however and take revenge.

Appearing in "Pursuit of the Vampire!"Edit

Synopsis for "Pursuit of the Vampire!"Edit

The story features a group of townspeople being joined by a stranger who tells them two murder victims are actually going to turn into vampires since a vampire was their killer. He leads them to a house where they are and kill them. The town leader ends up being the vampire that killed them, but the stranger, who is a werewolf kills him to eliminate competition for victims.

Retrieved from "https://heykidscomics.fandom.com/wiki/Creepy_Vol_1_1?oldid=106638"
Community content is available under CC-BY-SA unless otherwise noted.