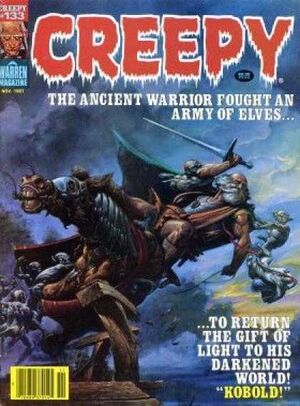 Appearing in "The Dead Remember"Edit

Synopsis for "The Dead Remember"Edit

A boy observes a man having a heart attack in his boat and fall into the lake. He swims out but can't find him and sees the dead man's pocket watch lying in the boat and helps himself to it. He begins to feel guilty about taking the watch and asks his simple-minded maid about it who says that the dead will return from the grave within ten days to claim their possessions. He believes her, so on the ninth day he swims out to where he thinks the man drowned and discovers a corpse upon which he leaves the watch. His friend tells him the next day that a friend they knew who had been regularly beaten by his father had committed suicide and it was this body he had left the watch on. To his horror, the friend assumes the watch was the dead boy's and tries to return it to the dead boy's best friend.

Synopsis for "Bring on the Clowns!"Edit

An insane killer wearing clown makeup has been going around chopping up people with a meat cleaver and an accountant that wishes to gain recognition becomes his latest victim. A witness present at the scene calls for the police and, after the killer has stuffed the accountant's remains into a trash can, the police arrive and mistakenly assume that the accountant is the clown. They pursue the clown into a factory where he kills himself by leaping into a vat of hydrochloric acid. The police tell the dead accountant's wife that he was the clown killer, giving him the recognition that he always wanted.

Retrieved from "https://heykidscomics.fandom.com/wiki/Creepy_Vol_1_133?oldid=106769"
Community content is available under CC-BY-SA unless otherwise noted.