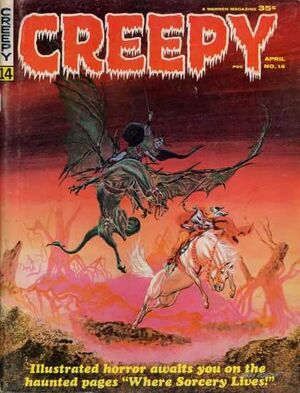 Appearing in "Where Sorcery Lives!"Edit

Synopsis for "Where Sorcery Lives!"Edit

A warrior, Garth comes after the sorcerer Salamand who was responsible for the destruction of his town and capture of his lover. The warrior battles various beasts sent after him by the sorcerer and finally comes upon him. The sorcerer reveals that he is going to use Garth's body such that the lover will love him, but ends up getting stabbed by her because he let his guard down.

Appearing in "Art of Horror"Edit

Synopsis for "Art of Horror"Edit

The story features a writer who plans to play a trick on his two friends in a haunted mansion by masquerading as a ghost. Only after frightening them he realized that he died when falling down the stairs, and truly is a ghost!

The story is about musicians who come across an old musician who sends snakes after them. Eventually they end up turning into snakes themselves.

Appearing in "The Beckoning Beyond!"Edit

Synopsis for "The Beckoning Beyond!"Edit

A man goes to see his friend, who has created a machine that opens up a portal to another dimension. The two head there, where they find bizarre creatures coming after them. They return to the normal world and the man destroys the machine, but his friend dies, as it ends up that he had already died the first time he used the portal and was only kept alive by heading to the other dimension.

Appearing in "Piece by Piece"Edit

Synopsis for "Piece by Piece"Edit

A scientist creates a Frankenstein-like monster from five different people and takes the brain from his assistant. The monster takes revenge upon the townsfolk who were mean to him when he was still alive, only for the corpses of the five people whom is body is made up of to climb out of there graves and take back all their body parts.

This story features a knight who comes across a strange castle where a wizard brings multiple dead soldiers to life to fight. The knight tries to escape the castle with the wizard's daughter, but are pursued by the wizard, who turns into a vulture. The wizard is killed by the knight, but this ends up killing the daughter, who was originally dead but brought back to life.

Appearing in "Curse of the Vampire!"Edit

Synopsis for "Curse of the Vampire!"Edit

The story features a family curse where every member of the vampire is supposedly supposed to turn into a vampire after death. A doctor who has fallen in love with a young woman who is part of the family refuses to let the family servant drive a stake through her since he believes she is just in a coma. It ends up that the servant is the true vampire, and has been able to blame everything on the family due to the curse. The doctor kills him and the girl awakens. However it ends up that the doctor is a vampire, and now knowing that she's human, he makes her his next victim!

Retrieved from "https://heykidscomics.fandom.com/wiki/Creepy_Vol_1_14?oldid=106651"
Community content is available under CC-BY-SA unless otherwise noted.