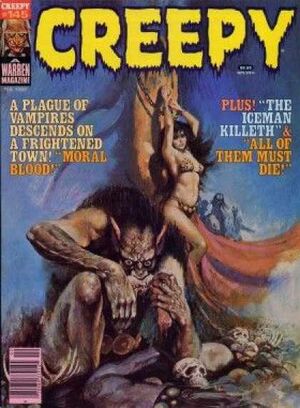 1 of 2
Add photo
The lead vampire realizes the town prostitute suspects his identity so he drains her blood. The drifter who had become fond of her waits for her rising in the cemetery and stakes her.

Appearing in "All of Them Must Die!"Edit

Synopsis for "All of Them Must Die!"Edit

A man plots to do away with his mentally ill wife for her money by taking her to a supposed haunted house in order to face her fears, but he gets what he deserves when his wife becomes possessed by the real ghost of a man-hating woman.

Appearing in "The Iceman Killeth!"Edit

Synopsis for "The Iceman Killeth!"Edit

An iceman murders a competitor selling refrigerators and dumps his remains in the swamp. The zombie returns and feeds the iceman through his ice grinder.

Retrieved from "https://heykidscomics.fandom.com/wiki/Creepy_Vol_1_145?oldid=106781"
Community content is available under CC-BY-SA unless otherwise noted.