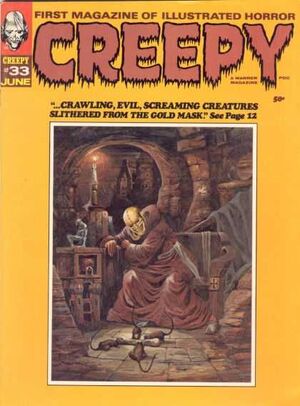 Appearing in "One Too Many!"Edit

Synopsis for "One Too Many!"Edit

A man leaves a planet killing all of the zoo animals he possesses except for one, which escapes. A year later he comes back with colleagues to retrieve his property, only for the creature who's escaped to have bred into thousands within the year, which completely overwhelm them.

A story of a boy whose grandfather kept a woman locked up in a golden mask. When the grandfather became sick and passed away, the boy brings her food. Years go by and the plague follows him everywhere he goes. Thinking she's actually the Queen, he returns to where the masked woman is, and finds that she had died of the plague long ago and that he was a carrier of the disease and was responsible for spreading it around Europe. Knowing this, he kills himself.

Appearing in "Dr. Jekyll was Right"Edit

Synopsis for "Dr. Jekyll was Right"Edit

A descendant of Dr. Jekyll pays scientists to create a formula that will bring out the good Mr. Hyde in people. While the formula works, one of the scientists kills him after he uses it.

Appearing in "I'm Only in It for the Money"Edit

Synopsis for "I'm Only in It for the Money"Edit

A tv host travels to see a voodoo tribe. Although they initially let him video tape them, they eventually chop off his head and shrink it.

Appearing in "The Full Service!"Edit

Synopsis for "The Full Service!"Edit

A boy playing with friends is forced to play a corpse and is buried alive. When adults come, his friends are forced to run off without rescuing him. One of the friends sees the coffin crushed and then sees the boy's ghost. While it ended up being a joke, he ends up trapped in a refrigerator that falls into a body of water, such that he is essentially buried alive.

Retrieved from "https://heykidscomics.fandom.com/wiki/Creepy_Vol_1_33?oldid=106670"
Community content is available under CC-BY-SA unless otherwise noted.