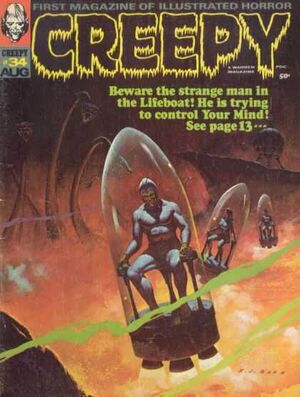 1 of 7
Add photo
A man who is a werewolf approaches a professor who's been studying genes and believes that an extra chromosome is responsible for criminal behavior. The man volunteers to be experimented on by the professor to cure him from being a werewolf. He ends up dying from the procedure, which ends up being okay with the professor as he's a werewolf too.

Astronauts come across a planet with a died out race, except for one man, Aceles, a man of large stature and great strength. He goes back on the ship with them peacefully, but it soon becomes clear that the entire race on that planet are contained within him and he is seeking to revive the species by transforming the astronauts into those of his species. The astronauts respond by throwing him out of the ship to his death.

Appearing in "The Cool Jazz Ghoul"Edit

Synopsis for "The Cool Jazz Ghoul"Edit

The story surrounds a jazz musician who ponders making a deal with the devil, but instead embalms his body and sells it for lot of money.

A wizard captures a princess and the knight that tries to rescue her. When the knight reaches his castle, the wizard summons a demon, who kills him because of a crack in his pentagram that prevents him from being protected.

Appearing in "Forgotten Prisoner of Castlemore"Edit

Synopsis for "Forgotten Prisoner of Castlemore"Edit

Dueling barons try to get rid of each other. One ends up getting locked up in a jail cell and the other is killed by a trap.

Appearing in "The Swamp in Hell!"Edit

Synopsis for "The Swamp in Hell!"Edit

A swamp beast rises out of the swamp and heads to a nearby town. All are frightened except a blind old man who befriends the monster. The monster ends up vanishing because of the kindness of the old man.

Retrieved from "https://heykidscomics.fandom.com/wiki/Creepy_Vol_1_34?oldid=106671"
Community content is available under CC-BY-SA unless otherwise noted.