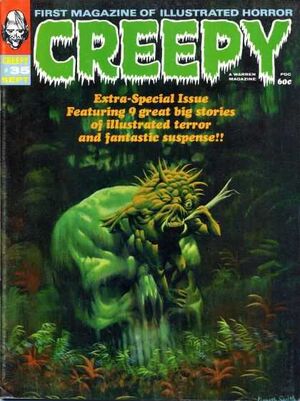 1 of 9
Add photo
A group of mobsters hustle a butcher for protection money who always refuses. Each hit man sent to kill him never comes back, so finally the boss himself arrives, and realizes that the butcher has killed all his men and served them to ghouls, which quickly arrive for him as well.

Appearing in "Legend in Gold"Edit

Synopsis for "Legend in Gold"Edit

This story features a pair of men searching for a rock that can turn things into gold. One of the men gets too greedy and touches it, turning himself into gold.

Appearing in "Polly want a Wizard"Edit

Synopsis for "Polly want a Wizard"Edit

A man tells the police about what happened to a magician he was working for, Mr. Black. Mr. Black was a talented magician who was teaching our protagonist various tricks, some of which involved the killing of birds. As our protagonist is about to kill a parrot for Mr. Black, demons suddenly arrive while he's working on his magic and kill him.

Appearing in "Army of the Walking Dead!"Edit

Synopsis for "Army of the Walking Dead!"Edit

In Germany during World War II, a doctor finds a way to bring dead soldiers to life as zombies. The zombies initially result in things turning out quite well for the Nazis, but the zombies go out of control and the doctor, the only one who can control them, ends up getting killed. Hitler orders the zombies and anyone who knows about them to be wiped out, erasing the story from the history books.

A businessman who owns a taxidermy store fears that his business partner and wife are going to kill him. He gets all worked up over his partner's bizarre behavior, only for it to end up that he was simply working on stuffing a puma.

Appearing in "The Druid's Curse"Edit

Synopsis for "The Druid's Curse"Edit

A crucified druid curses the soldiers who killed him, saying that they will all drown. Soon all but one have died from drowning. The last survives a shipwreck and heads to the desert, thinking he's beaten the druid's curse, only to drown in his own blood when he's mortally wounded.

A gunfighter makes a deal with the devil such that he'll never be harmed by a bullet. It works and he becomes a great gunfighter, but eventually is done in by something other than a gun, the heat of the desert.

An accountant whose boss catches him leering at his wife can't resist doing it again, but goes overboard and kills her when she screams. He then kills his boss as well and tries to get away with their dismembered bodies, but is chased by the police. He hides in the sewers but is eventually put on trial for being a ghoul. He tries to prove himself innocent by putting their bodies back together, but isn't that successful.

Retrieved from "https://heykidscomics.fandom.com/wiki/Creepy_Vol_1_35?oldid=106672"
Community content is available under CC-BY-SA unless otherwise noted.